Trending
javhide.comhttps://javplays.com
You are at:Home»Barcelona neighbourhoods»Eixample»Enric Granados: A special street in Barcelona
By Barcelona Connect on 21 October, 2014 Eixample
Carrer d’Enric Granados is perfectly situated in the centre of Barcelona, yet remains unknown to many visitors. The street is named after a well-respected local pianist and composer, who gained much acclaim and enjoyed great success right up until his tragic death by drowning in 1916.
I was lucky enough to move to the street around 2 years ago and this luck was only made evident to me when commenting on the move to friends.  The words ‘favourite’ and ‘street’ cropped up again and again. Many Catalan friends were also visibly envious of my new address, as it is often described as one of the most sought after streets to live on in the city.  Now I see why. 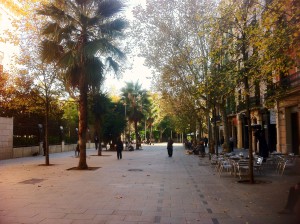 Enric Granados is a special street.  The way it begins just behind the University on Consell de Cent and only goes as far as Diagonal gives it a quiet exclusivity that many of the streets in Eixample lack.  This is not so say that it is overtly posh, rather it has a classical feel that suits the city’s relaxed ‘vida en la calle’ attitude; with a plethora of restaurants and bars of varying styles, it’s almost impossible not to enjoy a wander up and down this beautiful passageway.  The quasi-pedestrian set up of the street and the fact there is only enough room for one lane of traffic means that walkers and cyclists can relax.  It also allows the bars and restaurants to make the most of their terrace and gives the road a boulevard-esque quality.

Taking a stroll up and down, it’s easy to see why so many Barcelona residents want to live here.  It’s excellently positioned; 3 blocks from Passeig de Gràcia, and 10 minutes walk from Plaça Catalunya, which means you are always well connected to the most popular metro lines and have easy access to central Barcelona’s most exclusive shops.  It is also extremely quiet and residential in its atmosphere.

Dining with a local feel 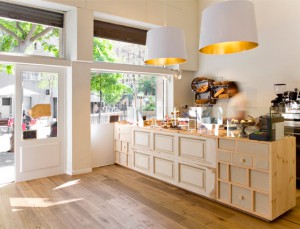 As with every part of the city, food and drink plays an enormous role in this neighbourhood. There is a fantastic, eclectic mix of new establishments offering a great variety of different foods to cater for all tastes, and some old hands that have been here for years and know their market extremely well, offering up some of the best in traditional dishes.  We recommend Bardot for a tasty Mediterranean meal, El Filete Ruso for some amazing burgers, and Cup & Cake for the best handmade cupcakes in town.

Enric Granados is not just a street where you can have fantastic meals, it also offers visitors the opportunity to sample incredible produce.  All the way from a family wine producer (David Moreno), to incredible Argentinian meat (Deli Argentino) and great local bakeries too.  All of these shops are reasonably priced and give the feel of shopping in your local neighbourhood rather than the tourist traps of the city centre.
There are several independent design shops and art galleries where you can spend time just relaxing after lunch, and great outdoor spaces replete with areas for children to play in while their parents sit around on the benches and catch up with their friends or simply have a rest.

A hidden treasure in Barcelona 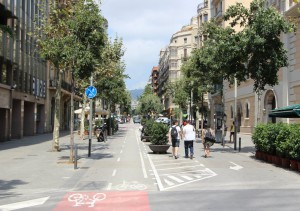 It is also a favourite with cyclists, offering a good route from the busy thoroughfare of Diagonal right down to the centre of the city and Plaça Universitat. As much as this street is a great place to be a resident, it also is diverse enough in ‘things to do’ that it should hold a more prominent place in Barcelona’s already rich collection of tourist favourites.

All in all though, the highlight of this picturesque promenade is merely being on it and taking it all in.  A leisurely stroll from one end to the other is really the best way to understand and feel the great quality it possesses.  I can’t recommend this place enough.  It’s become a firm favourite of mine since I moved in, so much so that I want to promote its charms further and now collaborate on a blog dedicated to showing the charms and wonders that the street has to offer not just to residents, but the visitors of Barcelona as well.
by Benjamin Ward
Share. Twitter Facebook Google+ Pinterest LinkedIn Tumblr Email