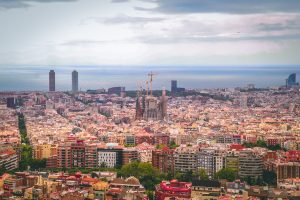 Have you ever heard of Els Bunkers? It is a former military base that previously housed defensive guns against incoming fighter planes to Barcelona. This defensive base of ‘Bunkers del Carmel‘ was built in 1937 to protect Barcelona during the Spanish Civil War. For years the area around the bunkers was extremely run down, but nowadays you can only see some concrete remains of the base, and the surrounding neighborhood has been restored. The area is now freely accessible and is particularly popular at sunset, when you will see many locals enjoying the 360-degree panoramic view up there, with a picnic and some drinks brought up with them.

How to get there?

Els bunkers can be accessed by public transport by the L5 to El Carmel or L4 to Guinardó – Hospital de Sant Pau, but as the metro is not closeby, you then either can walk the remaining hill, or simply take the 119 bus up.

Sant Pau is the world’s largest Art Nouveau complex, as well as being the most important work by Lluís Domènech i Montaner, the architect of Modernisme, the Catalan Art Nouveau. It is now classed as a UNESCO world heritage site for its artistic beauty in 1997.
The project was started in 1902, but the Hospital de la Santa Creu i Sant Pau itself has existed since 1401! In 1902, the banker Pau Gil made it possible to build a new hospital complex. The complex was planned with 48 pavilions, but only 27 were completed, 12 of them by Domènech and in Art Nouveau style, some of which can be visited today. In 1930, 7 years after Domènech’s death, the hospital was officially opened. The remaining parts of the “city within the city”, as the complex is called by the Catalans, are still used as a hospital today.

Salvador Viñals and Josep Domènech i Estapà designed this prison in 1904. During its lifetime, the prison became one of the most notorious and controversial prisons in Spain, due in large part to its role during Franco’s dictatorship. According to one historian, the prison was even “the mirror of Catalonia’s social and political conflicts in the 20th century”.

The prison is 113 years old and had an infamous reputation during its lifetime due to Franco’s dictatorship. The prison was named la modelo because it represented a new kind of prison. It had extra sports rooms, libraries and even hairdressers. In 2017, after 113 years, the prison closed. However, in the meantime of deciding what to do with the space, La Modelo is being exhibited to the public, opening a space to reflect on what it enclosed.

Right at the entrance to Creueta del Coll Park is la Finca Sansalvador. This modernist house has underground galleries from which you can access a well with medicinal water that was discovered accidentally at the beginning of the 20th century, when the architect Josep Maria Jujol was just beginning the construction of the building. Today, the house is the headquarters of the Taller d’Història de Gràcia. The caves can be visited every second Saturday and fourth Sunday of the month.

The Olokuti Terrace has gone unnoticed by many in the Gràcia neighbourhood for years, as it is located in the back of a shop that sells books, handicrafts and fairtrade items, as well as organic food. However, for those of us who are lucky enough to discover it, a world of tranquillity opens up amidst the crowds of the neighbourhood. The backyard of the house offers a space close to nature, with trees and plants and pretty, ceramic tables, so that you can enjoy the space at your leisure.
Also, the shop is a self-service type where you can choose between organic coffees and teas. During the week the space is used for people who want to organise activities such as language exchanges.

The Great Synagogue of Barcelona was one of the last to be discovered in Europe. It is located in a privileged setting, the Call de Barcelona, the old Jewish quarter of the city, which still preserves its medieval architecture. Fragments of medieval and Roman-era walls sit in the small space that you enter from the street into the synagogue, accompanied by tanners’ wells installed in the 15th century.
Through a guided tour, you will learn about Jewish culture and the history of the building. There is also a small museum that offers individual experiences such as Bar Mitzvah, Bat Mitzvah, Huppah and Kaddish.