When hearing the word Ramblas in Barcelona, most of us think of the famous pedestrian street in the heart of Barcelona. Starting near Plaça Catalunya and leading to the coast, this is one of the tourist Meccas of the city. However, many visitors are unaware that these well known Ramblas (as the street is split in several sections) are not unique. Throughout the city, other Ramblas of Barcelona can be found; often lined with bars, shops, and restaurants, these streets are ideal if you are looking for an entertaining night on the town, without the excess of people in the main Ramblas.

The best way to take in the atmosphere of these streets is by visiting a good local establishment, and enjoying a glass of wine and some tapas while people watching. There is no better place to do that than at El Tio Che (Rambla del Poblenou, 44-46).  Open for almost 100 years, this is a place that is a fixture of Barcelona and local residents. With simple but delicious savoury and sweet snacks, ice creams, and drinks, you cannot ask for more! Go for the retro vibe, great people, and delectable produce. 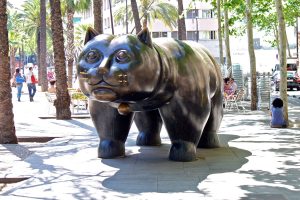 The culturally diverse area of Raval is a wonder for the senses, and one could say that all of this is encapsulated in the area’s Rambla. A controversial barrio as it used to house the city’s red light district, visiting this area is ideal if you want to get a feeling of the variety Barcelona can offer. Just know this is more gritty, and less polished than other areas…

The Rambla del Raval was only recently inaugurated in 1995, making it the youngest of its kind. The aim of this street was to create better traffic flow from adjoining narrow streets of the area, as well as to create a central area where public events, fairs, and markets, could be set up.

Visit the famous cat sculpture by Colombian sculptor Fernando Botero located at the end of the street, a now famous meeting point for the area’s youths, and a must for the photo book.

The most fashionable of our line-up, Rambla de Catalunya is one of the most frequented areas of the district of Eixample. Over 1km in length, the street runs parallel to another street known for its high-end appeal, Passeig de Gràcia, also lined with trendy bars and clothes boutiques. The choice for food and drink is abundant, all of the restaurants offering top quality food. Do be prepared to spend a little bit more here, however!

For those looking for a more cultural experience, all you need to do is explore the streets parallel to the Rambla, and you will be spoilt for choice. Head down Carrer Consell de Cent for some of the city’s best galleries, such as the Galeria Mayoral (Consell de Cent, 286)