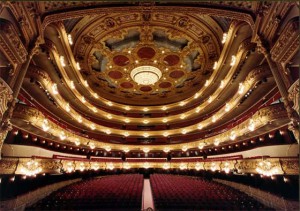 Barcelona is steeped in esoteric history, from pre-Christian civilizations, to Roman and Medieval times, right through to the Civil War and beyond. Here are a few of the spookiest tales of Barcelona’s past.

Our tour begins on Barcelona’s  busiest and most famous street, La Rambla. Half way down we reach the Gran Teatre del Liceu Opera House. Many theatres lay claim to a ghost or two, but the legend surrounding this venue is even more pronounced and macabre; it said to be cursed with bad luck, as it was built on top of an execution site from the Middle Ages. The Liceu Theatre was built in 1847, and only 14 years later was severely damaged by fire.  A short while later, in 1893 it was partially destroyed by an anarchist bomb attack. A century later the ghosts had not yet been put to rest, and it suffered extensive damage caused by fire in 1994.

2 Sing your heart out 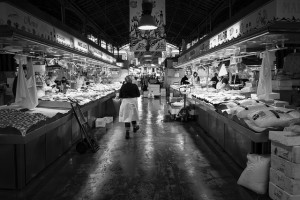 Slightly further down La Rambla we get to the Boqueria market.  This was built over the ruins of the Carmelite Descalços de Sant Josep convent, which had a reputation for strange occurrences.  One of the most notorious tales tells that a group of dead friars (or rather cadavers with tunics) appeared and sang one night, in front of the surprised and very scared brothers of the congregation. The cadavers then returned to their tombs in the cemetery. Ten days later, on the 25th July 1835, a crowd attacked the convent and slaughtered the Carmelites. Since then, every night of 25th July, it is said that you can hear the sound of singing in the market…

Just off La Rambla you’ll find the curiously named Plaça del Pi, or Square of the Pine. Legend tells that a boy used to live here, who was only able to make meaningless utterances.  His neighbours would tease him and tell him he would go to hell when he died because he could not pray. After he passed away he was buried on that square in the parish cemetery.  Shortly after, a pine tree started growing. People from all around Barcelona came to see this unusual tree, whose curled up leaves had meaningless words inscribed on them. Nobody had an explanation and so the church authorities ordered the tree to be dug up from its roots, and discovered the undecayed body of the boy with his mouth open, out of which the tree’s roots had grown.

4 Jilted at the altar 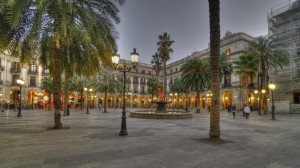 Plaça Reial is another historic location in the city with several stories to tell. Various people have claimed to have seen a young girl wandering around the square. It’s said that this is the ghost of a very sad young girl who has been walking about for two centuries. She was the widow of the Viceroy of Peru, a man far too old for her, but whom she was forced to marry because his nephew had left her at the altar.

If you go down Calle Ferran, towards the City History Museum, you’ll get to Plaça Sant Just.  This is often said to be one of the most magical places in the city due to the water that flows beneath the surface. Followers of the pre-Christian religion Mithraism used to gather here to practice their sacred rituals.  This could also explain why the Romans built their stronghold here as the spot was said to have been granted magic powers by Santa Eulàlia.
Share. Twitter Facebook Google+ Pinterest LinkedIn Tumblr Email