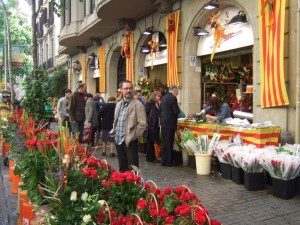 Happy Saint George’s Day! Sant Jordi is a Catalan festival that combines the festivities of Valentine’s Day, World Book Day and the legend of Sant Jordi (Saint George) all in a single day! Every 23rd April the streets are lined with roses, books and romance, as Catalonia comes together to celebrate the one of their patron saints: Sant Jordi, which is also the same day as St George’s Day in England, who is the English (as well as the Greek, Romanian, Georgian, among others’) patron saint.

Sant Jordi is one of the most unique and original festivities in the Catalan calendar and is only celebrated within this region of Spain and emphasis the importance of romance, culture and literature. It is on this day couples exchange gifts – as opposed to Valentine’s Day – with women receiving roses and men receiving books, which also helped to inspire the creation of World Book Day. The smell of roses and stalls selling books and/or flowers fill up Barcelona’s centre as everyone buys gifts for their loved ones.

Where to go…
To centre of activities is undoubtedly the charming but chaotic La Rambla and Placa Catalunya but there are also many special tributes to Sant Jordi outside of this area.

From 10am until 8pm the Government City Hall building opens its doors to the public for free. This is the only day of the year that visitors are invited into some parts of the building, making it a rare and unique opportunity. Throughout the day the courtyard of the City Hall and Noble Gallery will also sell roses, with all proceeds going to charity. This year the chosen charities are focused on helping those with neurodegenerative diseases and their loved ones, as the money raised is split between the association of children with cancer AFANOC, the Association of Relatives of Alzheimer Barcelona (AFAB) and the Catalan Association for Parkinson (ACAP).

Other activities around the City Hall include a traditional carillon concert; the official mass, which is held in the Chapel of Sant Jordi and the blessing of roses in the Gothic courtyard in of the City Hall. At 7pm in Plaça de Sant Jaume there will be a celebration of the Sardanes Sardanista Colla de Sant Jordi as sardana dancers fill the square accompanied with music. The City Hall also organises “Roses contra l’oblit,” which aims to ensure everybody is given a rose on Sant Jordi as it distributes roses to the elderly. 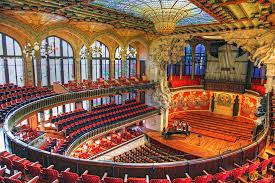 Casa Batlló will mark the occasion with a special rose tribute decoration on the outside of the building and sell roses at its entrance on Passeig de Gràcia (43), as well as having a differing schedule and feel to a usual visit to one of Gaudi’s most famous buidlings in the city. Palau de Musica (the Palace) celebrates Sant Jordi with special tours (only in Catalan or Spanish) at a reduced price, and its Mirador restaurant has created a differing Sant Jordi menu. The Palace’s main square will have live Jazz Music from 6pm until 8pm, entrance is free and a special “World Music” is on show at midday. Tickets are available from 11€.

The Estrella Damm Factory will also be hosting a variety of live music throughout the day as their tribute to Sant Jordi from midday unti 8pm. It is a free and un-ticketed event, with a full line up available here. Many theatres will also be holding discounted tickets on Sant Jordi’s day until the end of April in celebration of the literary significance of the day.

Note: Roses will also be sold outside Casa Batlló with proceeds going to Arrels Foundtion (a homless charity). Many of the stalls along La Rambla also sell roses on behalf of charities and non-for-profit organisations, so it is useful to consider this when deciding which stall to buy from.

Why is this happening…
Once upon a time in the medieval walled village of Montblanc near Barcelona, 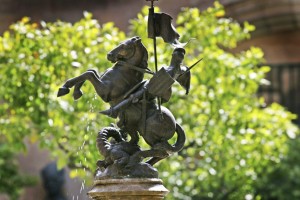 Where the dragon’s blood fell a red rose bush later grew, and Sant Jordi gave one of the roses to the Princess. This is why it has become customary to give a red rose to your (female) partner on this day, and why Sant Jordi is also the patron saint of lovers in Catalonia. The 23rd April was chosen as the day of celebration as it commemorates Sant Jordi’s death in 303AD. 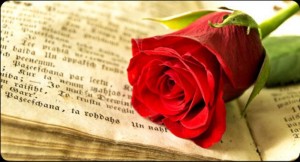 It was not until the 20th Century that Barcelona also celebrated literature on the 23rdApril. In remembrance of many famous literary figures, which were either born or also died on the same day as Sant Jordi; most notably, William Shakespeare and Miguel de Cervantes. This began the tradition of books being given as a gift to the male partner throughout Cataloina. Thus starting the exchange of roses for women and books for men every Sant Jordi. This newer tradition helped found World Book Day, which was officially announced in 1996 by UNESCO, and Barcelona’s contribution, commitment and celebration of literature was also noted by UNESCO as it is now one of the UNESCO Cities of Literature. 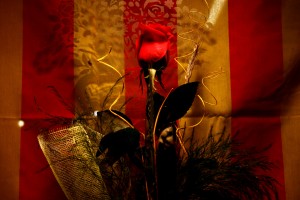 While the traditional red rose is still the most popular and prominent on Sant Jordi other colours are also given to symbolise other kinds of relationships. Yellow roses symbolise friendship, while white symbolises purity and innocence. Orange roses represent passion and desire, and pink means happiness. Around 6 million roses are sold on the day with 20% being regionally sourced and 80% are imported, with prices varying from 3 to 12€ (or occasionally donations if they are charitable roses).

In addition to the 6million roses around 20 million euros of books are sold on and in the run up to Sant Jordi. There are also various book readings, signings and opportunities to hear Catalan authors talk about their work on the day.

However, Sant Jordi’s day is not an official public holiday in Catalonia. All shops are open as normal and there are no changes to transportation on the day.