Trending
javhide.comhttps://javplays.com
You are at:Home»Restaurants & Nightlife»Eating out»The best plates of spanish food in Barcelona
By Barcelona Connect on 3 September, 2019 Eating out, Listings, Mediterranean

Without doubt Spain is an extremely popular place for tourists… it is so popular that is considered the third most visited country in the world with an average of 75 million people per year! We do not know what attracts people most to visit us, perhaps our beaches, the sympathy of the people, the weather…. But something surely everyone loves about Spain is the great gastronomic wealth we offer! As we all know that deep down inside, or not so deep, you are a consecrated “foodie”, now we will present you the best dishes of Spanish food in Barcelona that you can not miss if you visit our city.

The best spanish food in Barcelona: 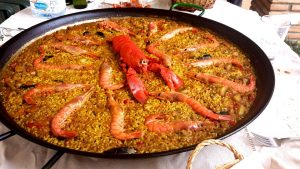 The most famous dish in Spain, without a doubt, is paella. Its name comes from the pan where the rice is cooked, the “paella” is usually cooked based on rice, vegetables and meat or seafood. Without a doubt if you are going to visit our beaches you have to sit in a restaurant on the beach and eat some tapas as appetizer, then a good paella for the second plate, this is the experience that you cannot miss! 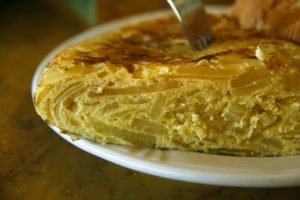 Surely you have heard of this famous dish, which is prepared a lot in many bars, restaurants or even at home. Everyone has his technique to prepare the perfect tortilla and the consecrated truth for the tortilla to be impeccable is that it has to be a little bit raw in the middle. In Spain there is an internal war among Spaniards over that the tortilla de patatas should be eaten with or without onion in it… and you? Are you with onion team or without onion team? 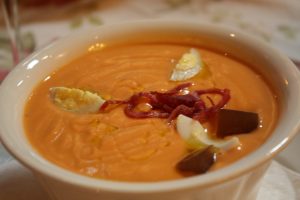 Despite being a dish with purely Andalusian origin, you can easily find this Spanish food in Barcelona. You may have heared more of gazpacho than salmorejo, but the truth is that salmorejo has more followers since it´s without cucumber. Both of them are definitely the ideal dishes to cool down in summer! And above all, don’t forget to pour a sprinkle of olive oil,some cubes of ham and grated hard-boiled egg.

Cold meat with bread with tomato 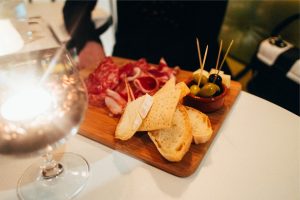 Maybe it is the simplest, and at the same time most delicious dish of all Spanish food in Barcelona. There are many people who disgust the sausage because they think the meat is raw, but in fact it is not raw but cured. It is essential that you accompany a good table of assorted sausages with slices of bread with tomato (scrubbed, not crushed). 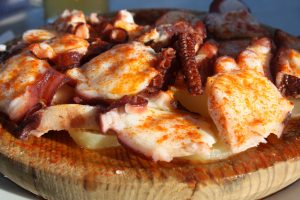 This delicious dish of octopus with paprika and potatoes will take you to the depths of Galician cuisine. Accompany it with a glass of frosty cider to get the full pack of flavors from northern Spain. Because the Catalan capital is a coastal city, you can easily find this Spanish food in Barcelona. 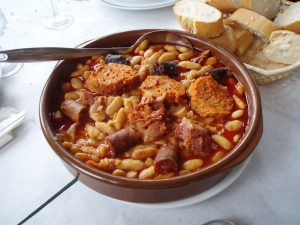 From Asturia, the fabada is an extremely traditional dish in Spain since it has been consumed since the 13th century. It consists of a stew of beans with chorizo, bacon, blood sausage, and pig’s ear. It is perfect to eat in winter since it is eaten very hot and gives you all the energy you need for the day. 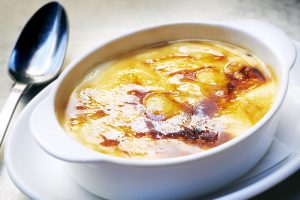 And finally … What could be better than a dessert? This traditional 18th-century dessert is made with custard-based egg yolk and caramelized sugar topping. You can’t leave Barcelona without trying it!

And the last one but also an important one, the ultra-famous “churros”. Many people believe that it´s of Mexican origin, but it was actually the Spaniards who brought this dish to Mexico (they were actually invented by the Chinese but popularized in Spain). The best afternoon plan you can do in Barcelona in winter is eating some churros with chocolate at a bakery in Carrer Petritxol.

You have already checked out that tapas are not the only thing that stands out in Spanish gastronomy by any means. Besides all these magnificent dishes, there are many other very typical Spanish gastronomy, that are also delicious and you should not leave our country without trying it, such as fried squid (chipirones fritos), the escalibada(grilled vegetables), the oxtail, the croquettes, the callos, the migas, etc … if we had to make a list of Spanish dishes it would be several pages!