Maybe the day 5 and 6 of January mean nothing to you, but for the vast majority of children in Spain these days are some of the most important days of the year. This is because instead of celebrating the arrival day of “Santa Claus”, many families prefer to celebrate on January 6 the “day of three wise men”, in which the three wise men from the east will visit house-to-house at night on January 5 leaving gifts to well-behaved children (and coal to those who have misbehaved.) Furthermore, with the arrival of the three wise men in Barcelona, the whole city will turn to celebrate this special day, spending unforgettable moments with family and friends, going out and participating in the activities and shows that will be celebrated in our beloved city Barcelona … and you, are you going to miss it?

The Three Wise Men in Barcelona: 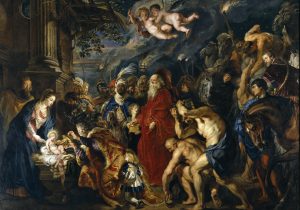 Legend has it that the three wise men departed from the east following a shooting star that led them on the road to Bethlehem, where the “King of the Jews” had just been born, who had announced the prophecy. As a sign of respect, these three wise men brought gifts to the new messiah. Melchior brought gold, representing his nature as a new king; Gaspar brought incense, to symbolize its divine origin; and Balthazar offered myrrh, as a prophecy to his future death and sacrifice for humanity.

This legend has been passed from generation to generation for more than 1500 years, until today where the history of the wise men in Barcelona has become a vital part of the city’s Christmas culture and traditions. That is why every year three king’s parade are held throughout the city where the wise men walk with their pageboy on the floats to greet all the children. In addition, during this parade the letters that children have written to the wise men are collected and candies are thrown from the float to the whole world, something that makes elders even more excited than children!

On the same day, January 5 night is when the wise men come to every child’s house to drop the gifts they have asked for, in the case that the child has been behaving bad, they drop a piece of sweet coal. As families know that their majesties are tired of the journey from the east, they always put a glass of water and some food under the tree for them to regain strength (never forget the camels, also put a plate with water for animals to rest). 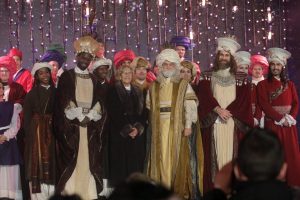 The next day the whole family eat together, exchange the remained gifts and eat the famous “Roscón de Reyes”, a typical sweet of these holidays and only eaten on this special day. The “Roscón de Reyes” is an “O” shaped cake, made with marzipan or puff pastry, which can be filled with cream and decorated with candied fruit of red and green colors with almond or sugar on top.

As every year, the arrival of the three Wise Men, is one of the most spectacular and special with horse 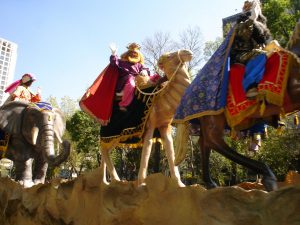 rides in Catalonia and celebrated in the city. This great party will be celebrated on January the 5th, at 16.00 PM your Three Wise Men will arrive at the port of Barcelona (at the ´Moll de la Fusta´) In the Santa Eulalia Pailebote. Once the Three Wise Men, and their assistants have landed, the reception ceremony and the magic will begin in Barcelona. In which the mayor, Ada Colau, will give them the key to the city so they can enter to all the houses of the city to leave gifts to the children who have behaved well (and coal to those who have not been so good)

Once the reception ceremony is over, at 18:00 pm the tour of the Cavalcade of the kings will begin. This will start at the Ciutadella park and will circulate through some of the most important streets of Barcelona, such as Paseo de Colón, the Via Layetana and the Sepulveda street untill they will reach Plaza España.

Some of the key hours of arriving at these points are: 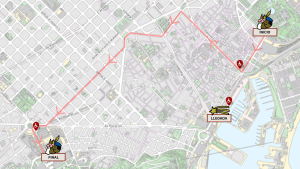 As you can see, this festive of the Three Wise Men in Barcelona is celebrated on a similar way as other winter festivities such as Christmas Eve or Christmas, when Santa Claus visits the homes and brings the gifts.

But the truth is that in the Spanish culture the “Day of the Kings” (three wise men) is something different and even more special. Since it is a tradition that we share together and we consider something related to our roots. In some houses they don´t celebrate Santa Claus, and only the Day of the Kings, the Three Wise Men. So if you want to experience a fully Spanish experience of Christmas in Barcelona as a local, do not hesitate and go to live the celebration of the Three Wise Men in Barcelona.