Trending
javhide.comhttps://javplays.com
You are at:Home»Listings»Sightseeing»Six must-see churches in Barcelona
By Madelyn Giron on 12 June, 2017 Sightseeing, Things to do 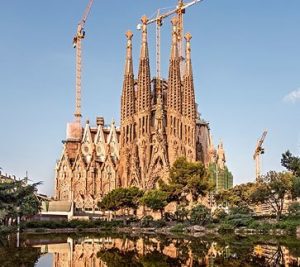 Without doubt, Barcelona has an amazing artistic and cultural heritage. Proof of that is its churches, that are some of the most wonderful constructions in all the world. Discover the six must-see churches in Barcelona!

It is the only wonder of the world still under construction, as of today 70% of the work has been executed. It is estimated to be complete by the year 2026. Five generations have been fortunate to witness the rise of this magnificent building. Its architect Antoni Gaudí was greatly influenced by the traditions of Gothic and Byzantine cathedrals for the Sagrada Família. He was a very religious man and he intended the basilica to express the essence of Christian belief through its architecture and beauty. 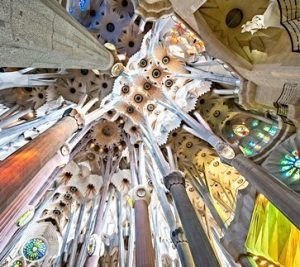 There is much Christian symbolism within the architectural elements, such as the 18 towers that represent the Virgin Mary, the 12 Apostles, and Jesus Christ. The lighting inside the Sagrada Família was designed to influence introspection and invite prayer. The stained glass, tiles, and structure are all influenced by different parts of nature to create a reverent atmosphere. To purchase your ticket to visit the Sagrada Família click here, all funds received for the Sagrada Família go to its completion. Thus, you not only get to see it,  but actively participate in its completion.

Architects Berenguer de Montagut and Ramon Despuig were in charge of the project. The Basílica was built using stone from the mountain of Montjuïc. It is said that merchants, fisherman and noble people transported these stones using their boats and hands. The corner stone of the temple was laid on March 25th 1329. 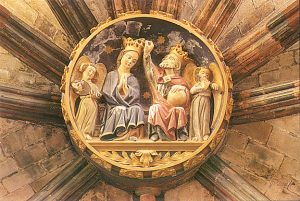 The Basílica has taken quite a beating throughout the years. The worst was in June of 1936, during the Civil War in Spain, when Santa Maria del Mar was set on fire and burned for eleven days straight. A lot was lost during the fire, including the Basílica’s magnificent Baroque altar, stained glass, images, and historical archives. After the war restoration was made to the Basílica bringing back its elegance. Visitors can now tour the Basílica via its rooftops, to purchase tour tickets click here. 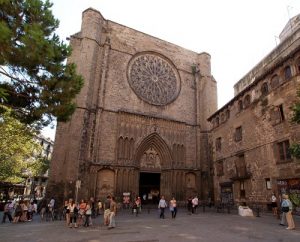 If you’re walking through the Gothic Quarter and hear the sound of church bells ringing, that might be the Basílica of Santa Maria del Pi which is located in between the Plaça del Pi and Plaça Sant Josep Oriol. The church was built between 1319 and 1391 in the Catalan Gothic style. Its cross-vaulted ceiling is the highest in the country. Four of the stained-glass windows that were created by one of the finest stained-glass artists of the Catalan baroque period, Josep Ravella can still be seen. 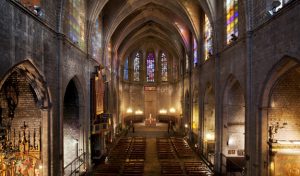 The Basílica also has a museum that houses a collection of gold, silverware, and other Medieval artifacts that are unique to Catalonia. It is the final resting place of many important members of Barcelona’s nobility, like Saint Josep Oriol who was a famous priest at this church. For visiting hours and tickets visit their site. 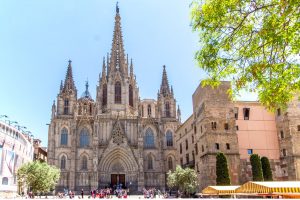 The construction of the Cathedral was carried out in three stages over a period of 150 years. Construction began in May of 1298 and presently restorations are being completed on the rooftops and bell tower. The Cathedral receives over three million visitors a year, who are intrigued by its Gothic art, Baroque altarpieces, choir, baptistery, and sepulcher or Santa Eulàlia. 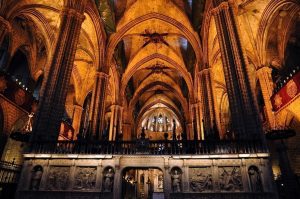 The Cathedral is open for services and offers daily masses, confessions, baptisms, and also provide shelter and vigil services for those who require special attention. Visitors are welcomed throughout the week, click here for visiting hours. 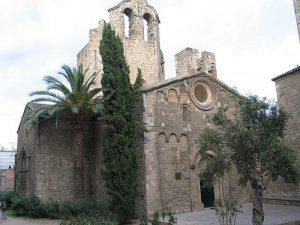 This simple structure is one of Barcelona’s oldest surviving churches. The church dates back to the year 911 when Guifré II Borrell, who is buried at the grounds, died. It was built in the Lombard Romanesque style and has survived various attacks and reconstructions. The church is simply decorated and hints us into what life was like in the city’s convent neighborhood. For visiting hours visit their site here. 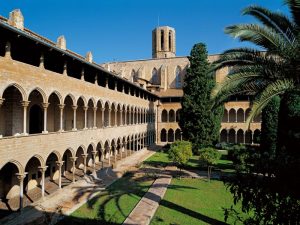 The monastery was founded in 1326 by King James II of Aragon for his wife Elisenda de Montcada.  The queen, in order to protect the monastery, gave it a series of privileges like the direct protection through the Consell de Cent.
The monastery was originally built in white stone and is surrounded by a line of walls along with three floors 40 meters long. There is a central garden or orange trees and palm trees. Wide arches decorate the floors forming columns. The sepulcher of Queen Elisenda is located in one of the wings of the building. if you interested in visiting, click here for more information.