Trending
javhide.comhttps://javplays.com
You are at:Home»Things to do»Museums & Art»Secrets and mysteries of the Sagrada Familia
By Barcelona Connect on 1 April, 2020 Museums & Art, Sightseeing, Things to do, Top Attractions, Tourist Services, Useful Information 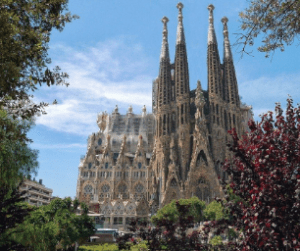 The Sagrada Familia is probably the most famous landmark for you to find in Barcelona. It is absolutely breath-taking for anyone interested in architecture. The building has numerous small details, and every detail has a function or deeper meaning to it. As there are so many small features, it is easy to overlook them. In this article we will tell you all the amazing secrets and mysteries of the Sagrada Familia, so you can make the most of your visit to one of the most famous churches in the world!

3 different meanings of the facades

When you visit the Sagrada Familia, the first thing you will see are the 3 facades. These facades form the impressive entrance of the church. As every aspect of this church, these 3 facades are really well thought out. In addition to this, they each have 3 different meanings.

Mysterious square on the Passion façade 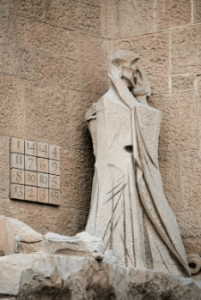 One of the biggest mysteries Gaudí took with him to his grave has to be this mysterious square. However, there is a theory about its meaning. It can be seen on the Passion façade next to a statue of the famous ‘Judas kiss’. It is a square with all kinds of numbers on it. At first, these numbers seem random and meaningless. However, if you look closely you can see a pattern. If you add up the number horizontally or vertically, the answer will always be 33. This is the age of Jesus when he was crucified after Judas had betrayed him. As you can see a lot of sculptures are interrelated, which makes it even more fascinating.

Another theory about this mysterious square is that it is connected to the freemasonry. This is an ancient worldwide secret society, and Antoni Gaudí was strongly connected to this group according to many. The highest and most secret rank in this society is the 33rd rank. Some people believe that the square refers to this highest rank of this secret society. However, the only person that could give us a definite answer is Gaudí himself, and he is resting peacefully in the Sagrada Familia. 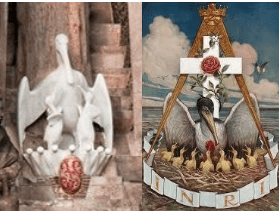 The square however, is not the only reference to the freemasonry. On the Nativity façade you can see a pelican pecking its own breast. According to many, this symbolizes the 18th degree of freemasonry. Look at these two images and mark the similarities!  In addition to this, the Sagrada Familia has 3 entrances. People believe that this is a reference to the freemasonry since masonic temples always consist of 3 doors as well.

Get your tickets for the Sagrada Familia

If you are into architecture, history or if you just want to marvel at the beautiful stained glass in the church, then don’t hesitate and get your tickets for the Sagrada Familia now! We really recommend you to pay a small additional fee so you can skip the line, which can be really long in the summer months. This way you will spend less time waiting so you have more time to enjoy. Make sure you get an audio guide in order to enjoy the Sagrada Familia experience to the max!