Trending
javhide.comhttps://javplays.com
You are at:Home»Listings»Restaurants»Carrer Petritxol, the chocolate street of Barcelona
By Barcelona Connect on 29 October, 2019 Restaurants, The Gothic Quarter, Top Attractions

Located in the Gothic neighbourhood, the medieval nucleus for Barcelona excellence and the oldest part of the city, you can find one of the most special roads in the whole city, Petritxol street. At first glance, it could be that this little street does not take you to another world, however, if you know a bit about the history and where to look, we assure you that you will not feel indifferent. Furthermore, if you have a sweet tooth and you can´t resist good sweets, then you are in luck as this wonderful street is known as “The chocolate street of Barcelona ” we will share all of our secrets with you!

It is difficult to believe that such a short road, as it barely measures 130 metres long and 3 metres wide, has so much history and hidden sights, for the same reason we advise you to pass through leisurely and with your eyes wide open, as to not miss any detail. 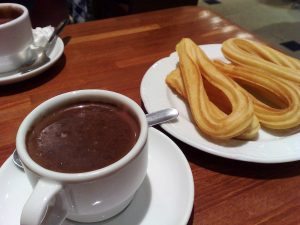 The first thing you have to know is that on this street you can find diverse shops, jewellers, art galleries and “granjas” (typical local shops in Barcelona, specialised in snacks, where they sell churros with chocolate, coffees and other sweets). Therefore, if you find yourself in the area and you start to feel hungry, we strongly recommend that you explore the street and try some of the sweets on offer.

One of the characteristics of Petritxol street, apart from being recognised as “the chocolate street of Barcelona ” is the fact that it is an area that is very strongly linked to art. Furthermore, you don´t only find this inside the galleries, as the whole streets is decorated with illustrations and majolica ceramics that tell the story of the street, theatre works, they recognise illustrious neighbours, etc… some of the most important majolica:

• Story of “L’auca del Senyor Esteve”: One of the works in customary Catalan style, written by Santiago Russiñol and illustrated by Ramón Casas.
• Plaque in memory of Àngel Guimera (poet and playwrite), who lived and died in number 4 of the same street.
• Plaque in memory of Monsterrat Caballé (opera singer and one of the best soprano singers of the 20th Century), who worked in 1950 for the scarf factory that was on th 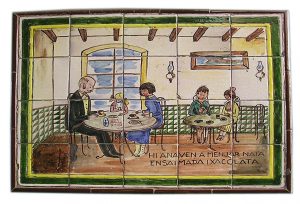 is street and, years later, put together her essay next to the famous Granja Pallaresa.
• Mojolica in customary style: there are many ceramics that represent daily acts that were made  by locals, for example getting snacks at the granjas, people walking in the street, representing baptisms and weddings, images of the mother of Christ etc…

Also of the beauty that is and the good location of the street, as it connects to Portaferrisa with the Plaza del Pi and is parallel to Las Ramblas, it is one of the most important streets in the city because in 1959 it was the first pedestrian street in the whole of Barcelona. This is due to the fact that in the 50´s there was a street where people came to go to see art galleries, socialise with neighbours and to snack, as the other streets were always too busy.

If you love art, you will be interested to know that in number 5 of the street is where, in 1877, the first art gallery in Spain took place; la Sala Parés, which is still active today. It was more or less in this place where the genius Picasso exhibited a painting for the first time, yet he did not have much success at this stage.

Last but not least, the name of the street has three possible origins. The first is that the space was owned by Mr Petritxol, who´s house was in the middle of the street (converting it into a space without an exit) and at the end had to divide his property so that people could pass through. The second hypothesis was that there was a large rock in the middle of the road (rock in Catalan is “Pedra” which could’ve become “Petra”) so that carriages could not pass by. Lastly, there is a legend that says that a clergyman bought the street from Muslims so that Catholics could attend mass on the Sunday, and that once the property became a portal (where the word Petritxol could come from), so that these worshippers had a direct route).

The chocolate street of Barcelona

Nowadays, this street is known for all of its granjas, chocolatiers and has sweet shops that are situated along this 130-metre stretch. Yet still, we have to say that it was not always as straight forward as this, the fame of this street is down to the art galleries it has. To the Barcelones that have always loved art, as it started the tradition of spending the evening visiting these art expositions in the afternoon and, staying around the area having a snack in a bar or granja in the area. That was how the street became one of the most visited for snacks and for chocolate with churros that they offered th 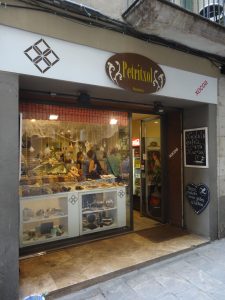 at if not for the art galleries, the street of Petritxol would not have become known as the chocolate street of Barcelona.

Currently, there is still a large number of shops, bars and granjas dedicated to to the world of sweets, some of which that have 80 years of experience. The most important are:

Without a doubt, you have to visit this small street during your trip to Barcelona. Whether or not, we recommend that you visit without time constraints and when you´re hungry, as for sure you are not going to be able to resist trying some of the delicacies that you will fall in love with from first sight. Now you know, don’t doubt it and come to discover the chocolate street of Barcelona