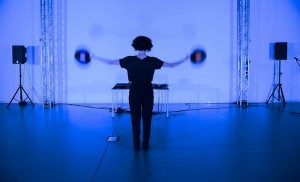 Sala Hiroshima exploded onto Barcelona’s cultural scene last year, each inauguration of a new show a declaration of the direction, intention and values upon whose foundations this exciting new performance venue in Barcelona’s Parallel neighbourhood was established. This second season looks set to consolidate and surpass its strong initial trajectory, which has now become the first complete cycle from which we can anticipate an upward spiral of creativity and innovation.

The venue stands out in their support for emerging artists and independent companies who are actively investigating new artistic languages and techniques, from the visual to the physical, and from mime to multimedia. A large stage and cutting edge equipment set the space for dance, music, theatre and performance. No less than 23 shows are scheduled between September and December, 65% of which are created and performed by women. This extensive agenda includes new collaborations with international companies and performers, as well as integrating with local contemporaries through co-productions and festivals.  One of 2014-15’s most prestigious collaborations was their participation in the Grec festival, a platform which introduced Sala Hiroshima to an extensive and appreciative panorama of public and press. 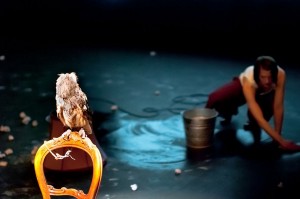 Silvia Rimat “I guess if the Stage Exploded…”

What kind of public attends the shows? “It’s so varied,” explains artistic director Gaston Core. “Each show draws different types; designers, fashionistas, musicians… those who recognise the artists, those who are inspired by the concepts…”  He is especially interested in reaching out to international residents in Barcelona who might not yet have connected with the performance and theatre scene, and in presenting international performance to local connoisseurs. Six international shows in the first three month indicate that they clearly know how to walk their talk.

The new season opens with the performance “I Guess if the Stage Exploded…” by Silvia Rimat from the UK, internationally acclaimed as “the British Miranda July”. This compelling piece on memory and recollection was created alongside specialists from Bristol Neuroscience and Experimental Psychology. It investigates what happens in our brain when we create memories, and our desire to be remembered. Skype links bring more performers to the stage. (25th & 26th Sept).

“Monster” by French company K. Dance is a contemporary dance and digital art show that reinterprets Borges’ novel “The House of Asterion”, itself based on the Minotaur legend. Digital technology and visual body work question the boundary between fiction and reality, and psychological structures in human relationships. (1st, 2nd & 3rd Oct).

Musical performances include “Codi Obert,” by Maria Arnal and Marcel Bagés, who remix the oral tradition of the Iberian Peninsula into a powerful cultural statement through narrative and sonic expression. (25 Oct). 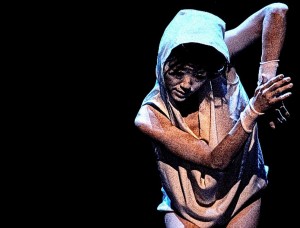 The Japanese tradition of Butoh is represented with a twist by Yuko Kawamoko’s “Forest where the Stardust PIKAru” (21st Oct). Social repercussions of the 2011 earthquake and tsunami in Tohoku (North Japan) included trauma and guilt. “We were all born for some reason in this era,” a wise friend reassured Kawamoko, who felt she should somehow have done more to help the suffering children. This piece is a direct response to that calling.

November highlights include a weekend of “Cuerpo & Performance”, part of the Ciclo Fenòmens in collaboration with Espai Erre. Various performers cross-reference the body with other disciplines: movement, dance, technology and image. (5th, 6th and 7th Nov).

In December, Spitfire from the Czech Republic present “Antiwords.” Two female protagonists don giant heads and explore beyond the limits of Václav Havel’s legendary work “Audience” by drinking 9 pints of beer, in what has been described an exemplary piece of Eastern European theatre. (3rd & 4th Dec). 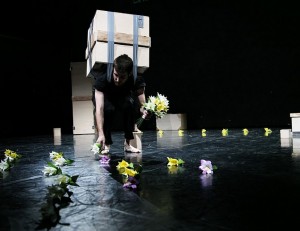 Perhaps the most risky proposal of the season is the visual theatre and physical wizardry of “Bonne, Belle, Douce” by the young student Alejandro Curiel, which immediately captured the attention of Sala Hiroshima’s artistic directors. Inspired by Jean Genet’s “The Maids”, this explores themes of identity, relationship and social roles (5th Dec).

Each of the 23 shows deserves a mention; this is just a small taste of the banquet. Sala Hiroshima has quickly established itself as an important player in Barcelona’s cultural scene by supporting a wide spectrum of proposals by emerging and established artists. Art and creativity are for everyone to enjoy; let the accessibility and variety laid out on their table inspire you to reach out and discover something new.

Sala Hiroshima also has an adjoining bar which functions independently. Whether you fancy a pre-show cocktail (try the Bloody Mary… impeccably mixed!), digesting the performance over some tapas before continuing your night out, or simply meeting up with friends in a trendy venue in the up-and-coming Parallel neighbourhood, Sala Hiroshima (C/ Vila y Vila 67) hits the spot.