Barcelona’s Gothic quarter is both an open air museum that pays homage to its rich cultural past, and an effervescent crucible of contemporary life. Its dense concentration of narrow streets are shared by long-time residents and countless visitors, each reflecting a different facet of this multi-layered neighbourhood through the intention with which their feet pace the cobble stones. If you’re visiting Barcelona, a walking tour  or spontaneous solo wander through the Gothic district is a must. Here are a few of details to keep an eye out for as you discover Barcelona’s most historic neighbourhood.

Thousands of visitors gather daily in Barcelona Cathedral’s square, looking up to admire its Gothic spires. If you turn around, you’ll notice this building on the corner. The exterior wall of the Collegi D’Arquitects de Barcelona (Architectural Society) has large friezes based on drawings by Picasso.
You’ll recognise his characteristic brushstrokes, a dance of precision and abstraction that invites us to contemplate and step into alternative patterns of perception. There’s also a magnificent library of architecture books inside, and a café. 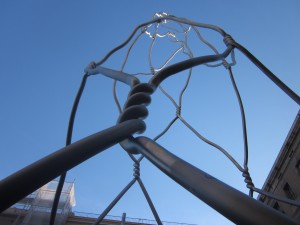 2. Castles in the sky

This stainless steel modern art sculpture in Plaça de Sant Miquel reaches 12m high and pays homage to the Catalan tradition of human castles. A breathtaking triumph of strength, agility and teamwork is expressed as casteller groups build towers of up to 8 storeys high during local festivals throughout Catalonia.
One of the most beautiful aspects of this tradition is the camaraderie and collaboration that each team consolidates, as this is the key to both their success and safety. The strongest men huddle together to form a stable base; strength and agility builds the next layers up, and a daring youngster scales to atop to complete the tower. Several restaurants with welcoming terraces are located in this square, where you can enjoy a meal or some refreshments.

One of the oldest shops that remain in Barcelona, Cerabella was founded in 1862 and has sold candles in its current location at C/ Sant Antoni Abat, 9 from 1865. Five generations of candlemakers have developed their artisan techniques through the years; you’ll find colourful contemporary candles in a fascinating old shop.
All their candles are handmade and finished according to the highest standards. After all, they have a reputation and a legacy to preserve that goes beyond the manufactured brand authenticity of the shops on either side.  The space itself looks rather like a Hobbit-hole, with an intriguing narrow staircase that leads to a private office area upstairs. If you’re looking for an original souvenir, made in Barcelona, check it out! 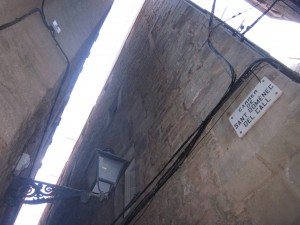 The Medieval quarter of El Call (meaning “narrow street”) was home to the city’s Jewish community in the 11th century and had everything they needed for life according to the Jewish traditions. You can visit the old synagogue, which is one of the most historic in Europe and home to some fascinating candelabras and ornamental relics.
The Jewish community played an integral role in Barcelona’s development as a centre for trade and business in Medieval times. As you explore this area, look out for the majestic old street lamps, which feel straight out of  Carlos Ruiz Zafón’s evocative bestseller “The Shadow of the Wind.” One of the loveliest tearooms in Barcelona can also be found here. Caj Chai, at Carrer de Sant Domènec del Call, 12, has an exquisite menu of teas and brews, and their house speciality chai is especially delicious. 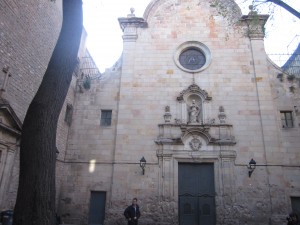 Plaça Sant Felip Neri is a contemplative and romantic square with a fountain in the centre surrounded by tall buildings. The Baroque church of Sant Felip Neri is pock-marked with shrapnel holes from the explosion of a bomb in January 1938. Forty two refugees lost their life, many of them children who were unable to run for cover when a military aircraft released its lethal load.
Inside, the church is decorated with neoclassical altars dedicated to hooded saints. More recent additions include paintings by the 19th century Catalan artist Joan Llimona whose style meanders from modernism to mysticism.
Share. Twitter Facebook Google+ Pinterest LinkedIn Tumblr Email