Each year from the 15th to 21st of August, the streets of Barcelona’s Gràcia district come alive with a party (la Festa Major de Gràcia) that transforms the neighbourhood. The Gràcia neighbourhood is located in the north west of the city centre of Barcelona in the direction of the hills to the west of the city. Gràcia was once a separate village from the city of Barcelona until 1897, and these days it still has the narrow village streets that give it such a special atmosphere.

This article will provide details of what to expect from the festival. There are also details on how to get to the festival, when it takes place, links to the official website and maps of the neighbourhood.

The Festa Major de Gràcia is considered to be Barcelona’s nicest, most festive and most welcoming street festival. It’s a wonderful tradition which attracts over one and a half million visitors each year. It has even been declared a Traditional Festival of National Interest by the Generalitat of 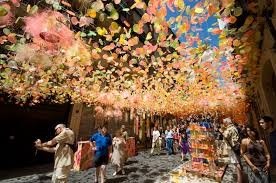 This is fundamentally a festival for neighbours and residents, but it is open to the public so you won’t need to buy any tickets to be able to attend the party. The Festa Major de Gràcia is free and takes place in the streets of the district. As in previous years, many of the Gràcia neighbourhood’s streets are decorated and filled with activities for all the family including competitions, workshops, sports, concerts and many more.

The concept of Gràcia festival is that streets in the neighbourhood compete to win the prize of best decorated street. A theme is chosen by each street. This very colourful local street festival fills many streets and plazas and has become more and more successful over the years.

Twenty four streets will take part in the competition (the highest number of streets since 2001 when 25 streets took part). This year, three new streets will also join the race: Calle Lluís Vuives, Plaza de Sant Miquel, and Plaza del Norte. Check the official website to know more about the other themes and to make sure that you don’t miss out on any events!
The award ceremony for the 21st edition of the street, balcony, and store window competition 2019 will take place in the evening on the 17th of August in Plaza de la Vila. 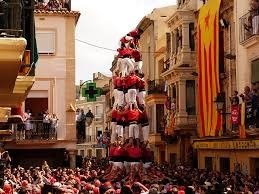 astellers (human towers), and Correfoc (traditional fire run). Many concerts are also organised in the main squares of the neighbourhood such as Plaça del Sol, Plaça del Diamant, Plaça Joanic or Plaça de les Dones. This year, the following groups will take to the stage: Joan Colom, Marilluïssa, Melenas, Power Burkas, DJ Waterparties, among many more…

Other events taking place during the festival include: food tastings, habanera singing, foam parties, children’s activities, open-air cinema… there’s something for everyone!

How to get to the event