The 3rd March marks a special, annual occasion in Barcelona. Less promoted than many other Catalan traditions and celebrations throughout the year, the Festa de Sant Medir in Gràcia is still a great day of grand festivities and fun for all the family. 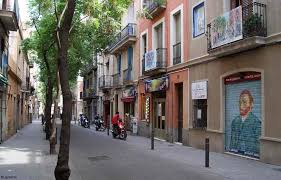 Set in the heart of Gràcia one of the most beautiful neighbourhoods in Barcelona (an area sometimes lesser known to tourists but hugely popular with locals). The Sant Medir Festival is often referred to as “la festa més dolça”, which translates to “the sweetest festival” because of the thousands of sweets given out throughout the celebrations. Every March the streets of Gràcia are transformed into even more vibrant, livelier and colourful scenes, as the whole community come to enjoy this special day. With parades, horse-drawn carriages, processions (and sweets!) from dawn until dusk it is definitely worth visiting with friends and/or family. 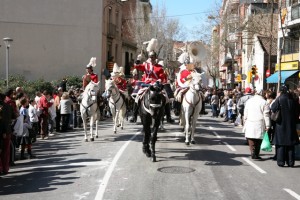 Parade groups (Los Colles) begin the day by visiting various streets of Vila de Gràcia, the oldest part of the district, as well as Sarria-Sant Gervasi and La Bordeta, distributing their delicious treats alongside horses and carriages. At noon the celebrations congregate around the Chapel of Sant Medir in Collserola, or the Church of St John if there is bad weather, to celebrate mass. After mass los colles, the community and parades continue festivities throughout Gràcia once more before los colles re-join one another on Carrer de Sant Salvador. The evening ends with a stunning firework display, like many other regional events in the country. 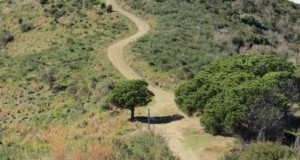 named Medir lived on the current site of the Sant Medir chapel, in the Parc Natural de la Serra de Collserola, well outside Barcelona at the time. Medir lived during a period of history when the Roman Empire controlled the region of Catalonia and brutally persecuted Christians. One day a bishop, named Sever, crossed Medir’s path as the farmer was planting seeds. The bishop was trying escape from the city in case of possible persecution. Bishop Server explained his dilemma to Medir but told Medir not to lie if the Romans did come looking for him.

Not long after the Bishop left, the Romans came to Medir asking if he had seen the Bishop. Medir told the Romans the truth and immediately his beans grew into big and fully-grown plants; it was a miracle. But, the Romans didn’t believe Medir and arrested him. Later they also found Bishop Server and arrested him too. Both Medir and Server were imprisoned and killed. After his death Medir became the patron saint of farmers, Saint Medir, as his beans had grown so extraordinarily. 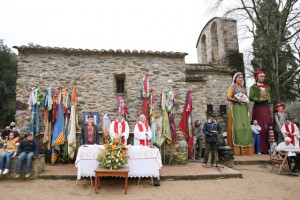 However, it was not until 1830 that the modern festival in Gràcia began with its iconic sweet throwing. Todays’ festivities relate to when a baker, Josep Vidal i Granés, living on the new street of Gran de Gràcia fell ill. After praying to God to cure him he vowed to return to his local town and make an annual pilgrimage to the chapel of Sant Medir. Once he was cured the baker banged on drums and gave out sweets to announce his return to health and to begin his annual pilgrimage. This is when the current festival was born. Year after year more and more people joined the baker in his path and journey to the chapel to celebrate the Sant Medir, handing out sweets along the way. There are now 30 separate colles (groups) that parade on the 3rd March through Gràcia in memory of the baker and farmer, Sant Medir.