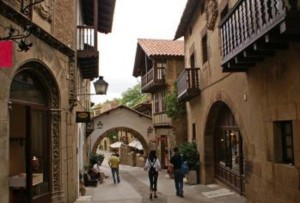 Poble Espanyol is a village located in the Montjuïc area of Barcelona consisting of restaurants, shops, parks, theaters, architecture and more. Paying the village a visit during your stay in Barcelona will allow you to get a glimpse of other areas in Spain and provide you and your family with a day full of things to do.

It was in 1929 that Poble Espanyol was built for the purpose of having a Spanish village in the center of the city for the Barcelona International Exhibition. The construction of the small village was finished in a little over a year. It would, and still to this day, represent the features and elements of villages throughout Spain. Poble Espanyol was only expected to be present until the end of the international exhibition but due to its popularity it still stands today.

Although a festive part of the city, it has had cloudy moments in history during the time of the civil war. It was hit with the reality of war and in that period the village served as a detention camp for prisoners.

The architects behind Poble Espanyol are Ramon Reventos and Francesc Folguera along with artists Xavier Nogues and Miquel Utrullo. They travelled around Spain making sketches, photographs, gathering ideas and materials to eventually make the village. As a result, Poble Espanyol is known as an open air architectural museum. There are over 15 areas of Spain represented in the village and over 100 buildings with most serving as replicas of monuments and buildings in other regions of the country.

Areas represented in the village include Madrid, Andalucia, Aragon, Navarra, Comunidad Valenciana and Isla Baleares. Some of the monuments and buildings featured as replicas are Navalcarnero from Madrid, Torre de Utebo from Aragon and Puerta de San Vicente from Castilla y Leon.

Museum Fran Daurel, which was introduced in 2001, is another attraction you will find in the village. The museum holds over 300 works from different times and of different styles. Works by Picasso, Chillida and Barcelo are just some of the interesting pieces you may come across. 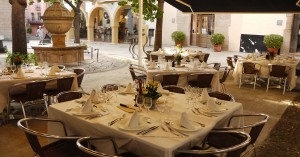 The restaurants and bars, like the buildings and monuments, are also meant to give you a dining experience you would find visiting other parts of Spain. In Casa de Arribes del Duero you will be introduced to products from the Arribes de Duero region or you can have a drink at Patio Cordobes, an Andalusia bar where you can enjoy a flamenco show.

Poble Espanyol remains alive and cheery in the night with clubs like The One featuring some of the best DJs and audiovisual technology, and Upload where you can find talk shows, concerts or even a Burlesque show. 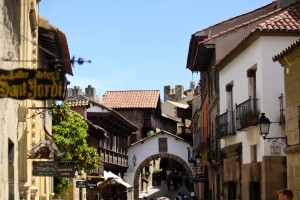 There is definitely no shortage of things to do in Poble Espanyol. In addition to the beautiful architecture, history and exhibitions, dining and nightlife, there are plenty of other activities.

Places to shop at will be plenty with over 30 stores and stands selling anything from hats, t-shirts and sports accessories to ceramics, wooden toys and religious objects. Along with shopping to keep you busy and entertained you can also check out a show at the theater where they often have entertainment for the children including an annual puppet show.

Address:
Av Francesc Ferrer i Guardia,13
Area:
Montjuïc
How to get there:
You can get to Poble Espanyol by taking metro L1 and L3 to the station Espanya, by bus lines 13, 23 and 150 or by car with the village providing a place to park your vehicle.
Telephone:
935 08 63 00
Open:
Monday from 9am to 8pm
Tuesday, Wednesday, Thursday and Sunday from 9am to midnight
Friday from 9am to 3am
Saturday from 9am to 4am
Tickets:
Entrance for an adult is 12€ and 7€ for children.
Website:
www.poble-espanyol.com