The Medieval period took place between the 5th and the 15th century, and was one of the most defining eras in Barcelona’s history. Bachinona (as the city was called at the time), experienced an impressive growth in both its population and commercial power, transforming the city into one of the most important political capitals in Aragón, as well as its main trading port. It was in this period that Barcelona found its new name as the ciudad condal, a nickname that has stuck ever since. The best way to immerse yourself in Medieval Barcelona is by walking through the Gothic Quarter and admiring its beautiful architecture and hidden nooks and crannies. However, bear in mind that although the neighbourhood was the heart of the Barcelona in this period, the actual concept of “The Gothic Quarter” was invented in 1911 to unify the infamous architectural style of the area for the 1929 World Exhibition.

In order to give you the most honest account of life in Barcelona in the mediaeval period, we’ve listed some of the most emblematic landmarks in the city, as well as those that seem medieval, but were actually built in the 20th century. 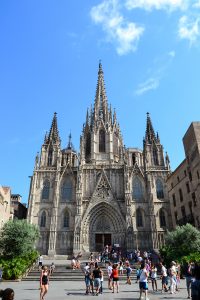 Built between the 13th and 15th century, Barcelona Cathedral was one of the most significant buildings of Medieval Barcelona, although its exterior was constructed in the 20th century in a Neo-Gothic style. It was precisely this remodelling, that encouraged the city council to undertake a complete face-lift of the old town and revamp the Gothic Quarter in its signature gothic style.
If you visit this astounding landmark, look out for the 13 geese that live inside the cloister. These animals represent Santa Eulalia, patron saint of Barcelona until the 17th century, who at 13 years old was persecuted, tortured, and crucified by the Romans, after confessing her Christian faith. Her remains can also be found inside the Cathedral, and her martyrdom is celebrated in Barcelona with the annual las fiestas de Santa Eulàlia.

This hospital is one of the most cherished buildings in the whole of Barcelona. It was built at the start of the 15th century with the intention of merging six of the city’s smaller hospitals together, after plague and famine devastated the city. Today you can find the national Library of Catalonia on the top floor, and the building itself is considered one of the city’s best examples of Catalan gothic architecture.

The Santa Maria del Pi is one of the most important churches in the city, and was constructed in gothic Catalan style in the 14th century. The church got its name from the image of the virgin that appeared on the trunk of a pine tree. A pine was thus planted outside the main door of the basilica, and remained there until the 19th century.Check the web site 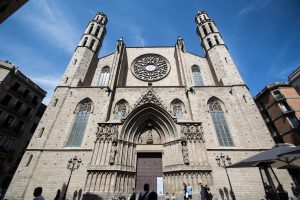 This church is special to the citizens of Barcelona, as it was built by the skilled sailors and merchants of the period, without any outside help. It was constructed in the 14th century and still remains one of the most loved basilicas in the city.

This street was one of the most important avenues for the mediaeval nobility of Barcelona who built their Renaissance and Baroque palaces nearby. Palau Aguilar, Baró de Castellet (now the infamous Picasso Museum), and Meca, are just some of the mediaeval buildings that have managed to be conserved to this day.

Plaza del Rey is one of the most magical places in Barcelona because as soon as you enter, you are immediately transported back to Medieval Barcelona. In this peaceful and historic square, you can also find the Palacio Real Mayor (built in the 11th century) which was the residence for Catalan counts between the 13th and 15th century. 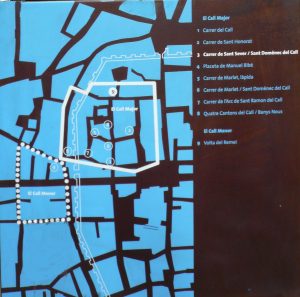 Located in the Gothic Quarter, El Call Judio connected the numerous street s where Jews lived from the 15th century. Here there are countless Jewish and historical remains, such as a piece of the wall that can still be seen on la calle del Call. Unlike this incredibly conserved artefact, there is no real proof that the famous synagogue located on la calle de Merlet, was actually built there.

A 13th century building built in a Gothic style, and the biggest private palace of Medieval Barcelona.

Located in the Raval neighbourhood, this church dates all the way back to the 9th century, and is one of the oldest basilicas in Barcelona. It was first built as a Benedictine monastery, and its interior is home to tombs that contain the remains of heroic historic figures like Wifredo II.

If you go searching for Medieval Barcelona in the Gothic Quarter, don’t forget to look up! There are also plenty of jaw-dropping examples of this era in the city’s gargoyles. Legend has it that these scary stone statues are actually witches that were petrified as punishment for spitting on those that walked by.
Despite the 20th century bringing many renovations to medieval buildings in Barcelona, there still are some traces of the city that have been conserved all this time like the chapel of Santa Agata, or the historical archive of the crown of Aragon.

This famous bridge on calle de Bisbe looks medieval, but in reality, it was built in 1911.

We do recommend that you take what tour guides tell you with a pinch of salt, as much of what we know about Medieval Barcelona comes from legends and stories. No one really knows for sure what happened all those years ago…