Trending
javhide.comhttps://javplays.com
You are at:Home»Things to do»Museums & Art»Classic Establishments: An Artist’s Vision
By Barcelona Connect on 6 February, 2015 Museums & Art, The Gothic Quarter

Classic shops and venues in the Parallel neighbourhood

If ever an art exhibition perfectly matched its surroundings, this is it. The experience of “Objects Perduts,” (Lost Objects) actually begins as you walk towards the gallery, in the heart of the labyrinthine Gothic district. Carrer Petritxol is full of the old, traditional shops that realist painter Neus Martín Royo (Barcelona, 1968) portrays in her most recent collection of works.

I walk past an eye-catching boutique with a low arched roof that sells what appears to be just one model of ballerina-style flat shoes – in every colour on the Pantone scale. A few doors along, a window display of sugary donut-finger churros catches my eye, framed by the traditional décor of the Granja Pallares. This old style café has surely seen several generations of children dunk their churros into its cups of thick hot chocolate. 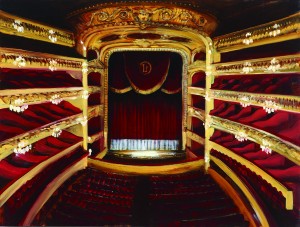 At first glance the Sala Parés is a spacious and elegant gallery. Guests fill the room for the inauguration evening, engaging with the art works with wistful, often slightly nostalgic smiles. Neus Martín Royo’s palette has exquisitely captured many of Barcelona’s oldest independent establishments, many of which are in danger of disappearing. Higher rent prices and increased competition from international chain stores is threatening the closure of these iconic stores and venues.

The Colmado Quilez (Rambla de Catalunya, 63), featured in this exhibition, is currently fighting to stay open and may close this month. It was founded in 1908 and is a reference for the best quality gourmet products to be found in the city.

An authentic Barcelona café experience in the Gothic area

I take a closer look at the painting of the Granja Pallara, which looks strangely familiar and realize that it’s none other than the churreria at number 11 of this same street which I passed on my way to the exhibition.

Restaurants, shop fronts and libraries are captured forever in these paintings, and many are accompanied by a poetic narration in Catalan. Whether this is your first time in Barcelona, or if you know the city quite well, this exhibition will provide a fascinating insight into Barcelona’s most authentic urban cityscape.