Trending
javhide.comhttps://javplays.com
You are at:Home»Things to do»The Ciutadella Park in Barcelona
By Emily Dillistone on 17 June, 2019 Things to do

Ever felt as if the hustle and bustle of Barcelona’s city centre was a little too much at times? You’re not alone! Why not go to Ciutadella Park instead, the perfect place to escape the crowds in Barcelona.

The Parc de la Ciutadella is very idyllic and probably the greenest oasis in the megacity of Barcelona. It invites you to relax, to unwind, and to go for long walks, as well as have a picnic. You can also enjoy the rowing boats on the lake. On the grounds of the Parc de la Ciutadella, there are several attractions, such as the zoo and the Catalan Parliament.

At the north-western entrance of the Parc de la Ciutadella, at the Passeig de Pujades, you will find an equestrian statue of General Prim, who gave the order for founding the citadel in 1869.

The park was designed under the command of Josep Fontsère, and the young and then unknown architect Antoni Gaudí supported him by designing the waterfall and its statues. Gaudí immortalised himself on the fountain, which stands by the lake. The water basin in front of fountain is guarded by winged dragons, a figure quite commonly found in his work. 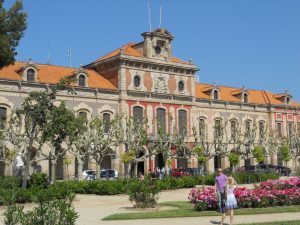 The Parlament de Catalunya can be visited on the first Friday of the month with a guided tour (in Catalan). The building is also open to visitors on 11th September (the Catalan National holiday) and 12th September.

The northernmost of the buildings, the Castell dels Tres Dragons (Castle of the three dragons), houses the Zoological Museum. The brick house is an example of early Modernism. The building was built in 1887 by architect Lluis Domènech i Montaner, one of the leading representatives of the Catalan Art Nouveau. Since 1920 it has been home to t 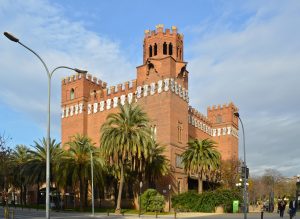 he Zoological Museum. The Castell dels Tres Dragon is a good example of how the Modernism movement sought to combine different styles and techniques.

The construction of bricks and steel elements was inspired by the then very famous, Amsterdam Stock Exchange. The towers and battlements are reminiscent of the Moorish style. The style of decorating building facades with ceramics, was revived and became an important part of Modernism.

Right next to the Castell dels Tres Dragons, the winter garden “L’Hivernacle” is located. The winter 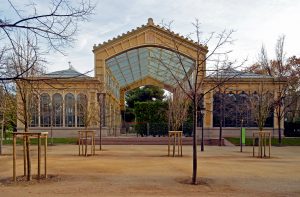 garden is a pavilion made of cast iron and glass in the Ciutadella Park. The architect was Josep Amargós. In the summer it is a particularly nice café. There are also several jazz concerts.

The Hivernacle is still attributed to the Modernism. The building was inaugurated in 1888 to the Barcelona World Exposition.

The Museu Martorell is the Geological Museum of Barcelona, built in 1882 by Antoni Rovira i Trias in a neo-classical style. The construction of the museum was made possible by a donation from Francesc Martorell Peña. It was the first museum in Barcelona and today it holds a large collection of minerals.

The Umbracle is a wood-brick construction. In it grows large tropical plants that prefer the shadow of the great virgin forests. Although this building needs an urgent rehabilitation, it offers a very impressive atmosphere inside. The architect was also Amargós.