On 23rd November, over 400 lights sparkled over the streets of Barcelona to mark the start of the Christmas period. Barcelona might not be known for its mulled wine or mince pies, but what it lacks in Lapland’s magic it makes up for in Christmas markets. 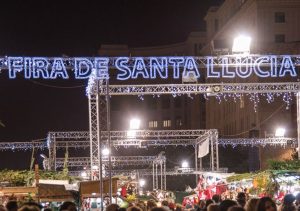 If you only have time for one Christmas market in Barcelona, Fira de Santa Llúcia is the one to go for. As Barcelona’s oldest Christmas market, Fira de Santa Llúcia dates back to 1786 and is set in a spectacular location right in front of the Catedral de Barcelona.
Go for:
Christmas decorations such as the traditional caganer (the squatting man!) complete in every Catalan nativity scene.
Artisan hand made gifts such as crafts, jewellery, toys, leather goods and ornaments.

Underneath the stunning Sagrada Familia lies Barcelona’s most traditional Christmas market, the Fira de Nadal. Although it is smaller than Fira de Santa Llúcia you’ll find it hard not to be won over by its Catalonian Christmas charm, and the sensational smell of roasting castaneas and other Christmas treats!
Go for:
Fried Churros!
Children’s activities such as arts and crafts and a bouncy castle! 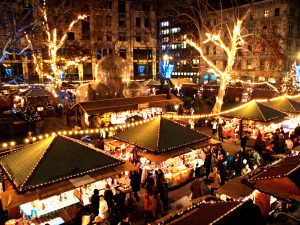 First held in 1877, the Fira de Reis Christmas market was set up originally selling children’s toys. Naturally, the market has now expanded to sell costume jewellery, decorations, clothes and ceramics, but when the toy shelves of El Corte Ingles start to thin out, this is the place to go! On the final night, on the Cavalcada de Reys the market is open until 3am!
Go for:
Children’s toys!
Traditional Catalan decorations and jewellery