Throughout the region of Catalunya you may have come across an intersting piece of traditional Catalan dancing. In Barcelona, people sometimes join their hands together and dance in circles with small precise steps. The circle goes slowly round, and round whilst more people join to make the circle bigger. This is the Sardana: the traditional national dance of Catalunya. Discover all the ins and outs of the Sardana dance in Barcelona! 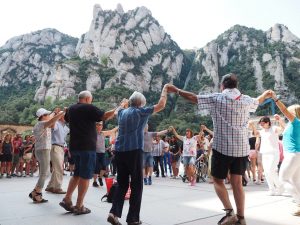 It is important to the Catalans not only because it bring the people of the region together, but it is a symbol of their national pride and identity. To understand the meaning of the dance, it is important to look at the historical context behind this supposedly simplistic idea of Catalan dancing. The Catalans are a proud and patriotic people with distinct traditions and culture that set them aside from Castillian Spain.

The Sardana is a relatively easy dance to perform in terms of physical strength making it accessible to people of all ages and abilities yet the rules governing the choreography are relatively sophisticated. It can be either of the same sex, mixed or with couples and the basis for the dance is the division into two sections that is known as “tirades” in Catalan and which can be either short (“curts”) or long (“llargs”). The “curts” are performed with arms down by the side while the “llargs” are performed with arms at shoulder length. The Catalan dancing is complemented by a “coba”, a small group of musicians accompanying the dance with a selection of brass instruments and lead by the “flaviol” a type of flute whilst the tambourine sets the rhythm. 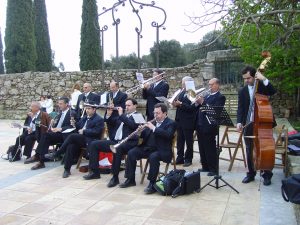 musical accompaniment. A type of band called a “cobla” which consist of 11 band members playing some 12 instruments perform the music. Five of these instruments are wind instruments, with the addition of a double bass and a small drum known as a “tamboril”. The interplay of “curts” and “llargs” can be varied to give the dance its own structure, but there are certain elements which must feature in any Sardana to make it complete! Namely, the song must begin with an introit, a short musical introduction that announces the beginning of the dance and signals the dance or sardinistas to take their places.

-Where can you see the dance?

The best times to see an authentic Sardana dance in Barcelona are at a festival. 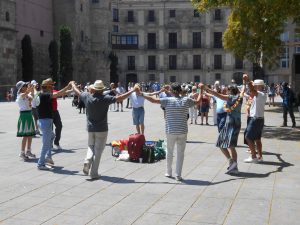 The Focs de Sant Joan festival on the 24 of June is one example. Visit a Catalan village outside of Barcelona to capture the dance in authentic surroundings. You can also see this type of traditional Catalan dancing throughout the summer months in the sunlit early evenings starting around 18:00 to 18:30. Within Barcelona, hotspots include Plaza Jaume I on Sunday evenings as well as the nearby grounds of Catedral de Barcelona on Saturday evenings.

Without a doubt it is one of the oldest traditions that exists in Catalunya, therefore is you haven´t already seen a Sardana dance in Barcelona, we recommend that you visit when the neighbourhoods celebrate their fiestas in the city; and that you go to see some of this dancing… You can even join in as the dance is very easy!