Trending
javhide.comhttps://javplays.com
You are at:Home»Things to do»Museums & Art»Casa Amatller: Rethinking Modernist architecture in Barcelona
By Poppy McAlister on 24 October, 2017 Museums & Art, Things to do 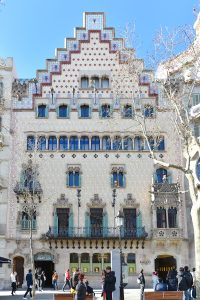 In 1898, a rivalry was brewing. With the Modernist explosion taking over Barcelona, it was no longer enough for the bourgeoisie class to boast their status through glamorous clothes and fancy hats. Colourful, ostentatious, kaleidoscopic houses were the new trend in Barcelona, and Gaudí was not the only architect to oversee their construction.

Directly next to Gaudí’s better known Casa Battló is the charmingly undiscovered Casa Amatller. In 1898, Antoni Amatller, a wealthy industrialist chocolatier, bought the building for 490.000 pesetas. He commissioned Josep Puig i Cadafalch, a prominent architect whose work can be seen all over Barcelona, to convert the building into a flamboyant family home. Casa Amatller opened to the public as a house museum only 2 years ago, after more than 5 years and €4.9 million were put towards a renovation that ensured the house is just as enchanting and impressive now as when it was lived in. 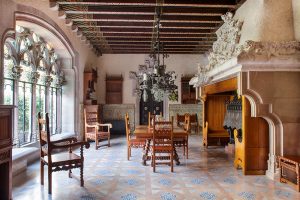 For a throwback in time to the luxurious lifestyle of Barcelona’s bourgeoisie, look no further than the guided tour of Casa Amatller. With intimate tours in English, Spanish and Catalan, a step inside the Casa Amatller time warp is a genuinely breath-taking and thought provoking experience which certainly gives Gaudí a run for his money. 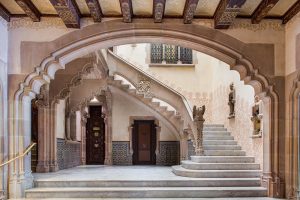 The tour begins at the foot of Amatller’s grand spiral staircase, where guests are handed blue bags for their feet to protect the carefully restored flooring. A detailed presentation of Amatller’s life follows, using meticulously recovered historiographical documents, photographs and first drafts of Cadafalch’s sketches. The tour follows a full circle of the house, from the grand dining room to the private quarters of Antoni and his daughter, Teresa. Every detail of the house museum has been beautifully preserved from the marble and stone statues on the walls to the original beds, clocks and even the dumb waiter. The only significant change to the house is the conversion of the downstairs kitchen to a genuine Amatller chocolate shop…hardly a disappointing end to the tour!

Antoni and Teresa, a 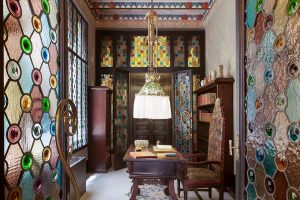 re equally responsible for the charm behind Casa Amatller. Both father and daughter were art enthusiasts and together acquired a collection of hundreds of significant pieces, particularly glasswork and both antique and contemporary Catalan paintings. In his will, Antoni requested that if Teresa did not provide an heir, that Casa Amatller would be converted into an Art Foundation to preserve their collections. In 1942, Teresa oversaw the house’s conversion, which in turn has allowed much of Antoni and Teresa’s collections to be displayed in Casa Amatller today.

The time, dedication and effort that have resulted in the incredible renovation of Casa Amatller contribute to the magic of the building, whose family and story clearly mean so much to all those who have worked behind it. The guided tour of Casa Amatller provides the most authentic experience of modernist architecture you will find in Barcelona, as well as leaving you contentedly admiring the unsung heroes of the Passeig de Gràcia.

Intimate tour up to 12 people per group

Up to 15 people per group

Available to book on the day