Undoubtedly, Barcelona is one of the most cosmopolitan and open-minded cities in Europe. That is why it is easy to find art demonstrations in every possible way (theater, music, painting, sculpture, etc …) wherever you go in the city. One of the most beautiful, original and at the same time “hidden” forms of art is Street art, and today Barcelona Connect will give you a compilation of the best Street art in Barcelona so you won’t miss any of these wonderful artistic representations during your trip in our city.

The best street art in Barcelona:

-The kiss of freedom mural

Possibly it’s the most famous and instagrammed Barcelona’s mural Street art in the world. This work of 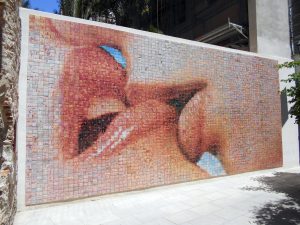 art is made by the artist Joan Fontcuberta and is entitled “The world begins with every kiss” or as it is more commonly known ” the kiss of freedom mural.” Located in the square of Isidre Nonell (just 2 minutes walking from the cathedral of Barcelona) we find this mural made of more than a thousand photographs that the people of the city sent to “the newspaper” illustrating what freedom and happiness means to them. After grouping these photos by colors and composition, he managed to create the image of two lips kissing, isn’t it precious?

Although he’s not the best known artist in the city, he is definitely the one who makes the most beautiful 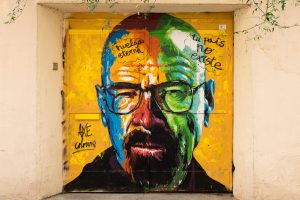 works and with which people identify the most. This is because AXE Colors is well-known based on portraying our favorite characters from our favorite series: Walter White, Daenerys Targaryen, Jon Snow, Ragnar Lodbrok, Rick Grimes … among many others. Most of his creations are in the neighborhood of Gracia, others can be found in Raval and Barceloneta though. 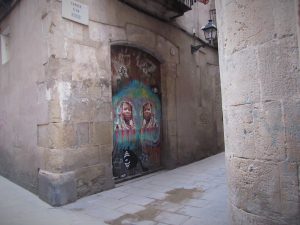 Another artist who gradually was crowned as one of the benchmarks of street art in Barcelona is Akore.His creations are easy to recognize as they tend to focus on the theme of “Afrocolor”, a word used to define his unique artistic style. Following the “afrocolor” line (a mixture of African-American, tribal, hip-hop and urban culture art), his beautiful and colorful works adorn the streets of Barcelona, especially those of the Gothic quarter, where most of his creations are found. 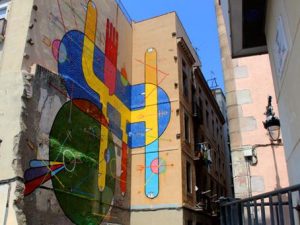 The artist Sixe Parades chose Sant Pau street nº88, in the heart of Raval, to honor the great genius of surrealism Joan Miró. This work is part of a project where you can recognize the work of different historical and renowned figures of the city.

Obviously there are many more samples of street art in Barcelona, such as the murals that we can find in “Jardins de les 3 xemeneies” in Paral·lel or the Keith Haring mural in the MCBA museum to support the fight against AIDS. That is why our recommendation is that you can “get lost” in the city center´s streets and be attentive to its walls, because apart from a lot of history you can find, there are also really wonderful street art samples in Barcelona.