Trending
javhide.comhttps://javplays.com
You are at:Home»Listings»Sightseeing»The Best Roman Ruins in Catalonia
By Barcelona Connect on 7 May, 2020 Sightseeing, Things to do, Tourist Services, Useful Information

Catalonia is famous for many attractions. However, what many people don’t know is that there are numerous Roman ruins still to be found within this region! For centuries, Spain was under Roman occupation. Find out everything you need to know about the Roman ruins of Catalonia. From aqueducts to Amphitheatres, this article will cover them all! 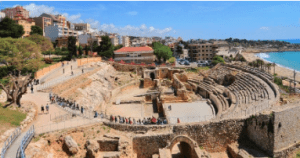 During the Roman times, Tarragona used to be an important city called Tarraco. In the 2nd century, it served as the capital of the Roman province. Therefore, there are many Roman remains to be found.

One of these remains is the Tarragona Amphitheatre. It was located just outside the city and close to the beach. The Amphitheatre was initially built for 2 activities: battles between gladiators and fights between men, usually prisoners, and animals. Later on, the theatre was also used as a place where executions took place. The theatre can hold up to 15,000 visitors. Therefore, it is one of the smaller Roman amphitheatres. Nonetheless, it is definitely worth visiting as it is extremely well preserved!

Nowadays, the amphitheatre serves as a museum, which is incredibly popular amongst tourists. The entrance fee is extremely low as it varies between 3 to 5 euros.

As mentioned before, Tarragona has many Roman remains to be found and we would like to share another one with you. The Roman circus in Tarragona is considered as one of the best-preserved circuses in Europe. It was built in the 1st century and it could hold up to approximately 30,000 visitors. The circus is a massive building measuring up to 325 by 115 metres.

At the time, the main purpose of the circus was to hold horse and chariot races. Nowadays, the circus is visited by many tourists every year. Just as the amphitheatre, the entrance fees are very low. This makes for a great experience for anyone interested in ancient ruins and beautiful architecture! 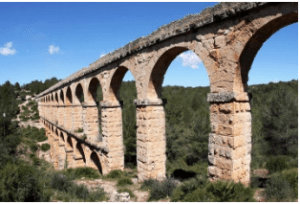 To the north of Tarragona you will be able to see a truly beautiful sight. The Pont del Diable, or Devils Bridge, can be found in a large natural park. The aqueduct is only a small fragment of the size it used to be. However, measuring at 217 metres, it is still a very impressive sight!

The aqueducts’ origins lie somewhere around the 1st century, when the Romans built it in order to supply the city with water from the Francolí river. According to archaeologists, the original structure used to be more than 10 kilometres long!

We recommend visiting this Roman ruin of Catalonia around sunset, because this will give you the most spectacular view and the best holiday pictures!

Temple of August in Barcelona 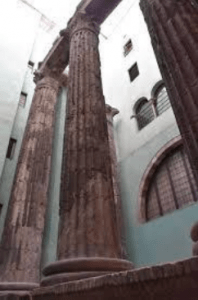 Not only Tarragona was under Roman rule, but Barcelona as well. Around the 1st century, Barcelona, or as the Romans called it ‘Barcino’, was a pivotal city to the Romans. Although most of the Roman remains have been destroyed or built over, there are still some Roman remains to be found in Barcelona!

Close to Plaça Sant Jaume you will be able to find the Temple of August. Located in the city’s Gothic quarter, four 2,000-year-old columns from the Roman Empire’s era are enclosed in the building that houses the Centre Excursionista de Catalunya.

The temple was originally built to honour the Roman Emperor Augustus and it used to overlook the ancient Roman city of Barcino. The 37-metres-long building was built in the 1st century. It was originally surrounded by numerous 10-metres-tall columns, but now only four of these remain. It is definitely worth visiting as it is one of the last Roman remains left in Barcelona!