Being a coastal city, Barcelona is quite flat. This is great not just for visiting landmarks in the city, but also for finding viewpoints of Barcelona that aren’t disturbed by mountains or any other peaks and ridges getting in your way. There are so many viewpoints in the city that we would love to include in this article, without even mentioning the hotel terraces! But as life is short, and we know that you don’t have all day, we’ve narrowed it down to our top 5 best free viewpoints in Barcelona. 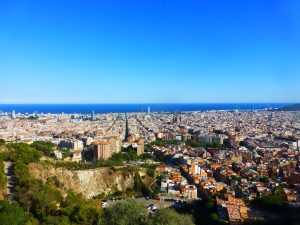 Without doubt, our favourite viewpoint in the city are the Bunkers del Carmel. Although not the easiest of places to get to, it is by far one of the most charming. This is because the top of the Turó de la Rovira is an impressive 261.8 metres above the city, offering visitors a spectacular 360 º outlook over Barcelona, and some of the most breathtaking panoramic views in the city.

At the top of this mountain are the remains of military bunkers. These bunkers were built during the Spanish Civil War to defend Barcelona from airstrikes carried out on the city by the Italian fascist regime. These days, not much evidence remains from these constructions, apart from the faint outline of tiles hidden in the ground. These remains can be traced back to the barracks constructed in the area in the twentieth century, where up to 600 people lived, that were demolished in 1992 when Barcelona hosted the World Olympic Games. 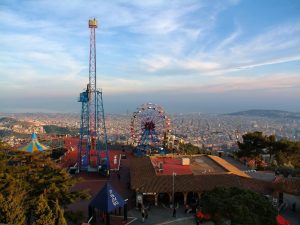 viewpoints in Barcelona and, honestly, we’d probably agree since it’s the highest point of the Collserola mountain range. Many think that the view of the city from Tibidabo is a little far away, but we think it’s the perfect place to observe Barcelona as a whole, more than 500 metres above sea level. As well as the impressive view, you can also find a theme park at the top of the Mount Tibidabo. Built in 1901, this amusement park is the oldest functioning theme park in the whole of Spain, and the third oldest in Europe.

If you google the Barcelona “skyline”, you will see the silhouette of this landmark hotel situated on the city’s shore. On the 26th floor is the Eclipse bar, totally free to enter (and even open to those than aren’t guests at the hotel). From here, you can see some of the most beautiful views of Barceloneta beach, and if your wallet lets you, you can enjoy one of the hotel’s signature cocktails while gazing over the sands… this is one you cannot miss!

During your time in Barcelona, we recommend visiting Plaza España, home of the MNAC (the Museum of National Catalan Art) where you can spend at least a whole morning discovering some of the best examples of Catalan and Spanish art. Even if you don’t fancy entering the museum, at least make the trip up to its front doors for an incredible view of some of Barcelona’s 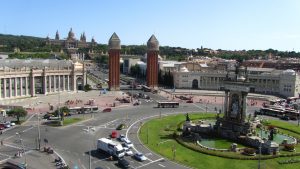 We also recommend taking a trip inside the Las Arenas shopping centre nearby, a refurbished bullfighting ring, and heading up to its rooftop for unparalleled views of Plaza España’s architecture and Montjuic, from above.

If you’re looking for somewhere to grab a coffee or a bite to eat in the very heart of the city, this is your place. On the highest floor of the famous El Corte Inglés shopping centre in Plaza Catalunya, is a bar-restaurant with sensational views of the very best of the centre of Barcelona. As well as that, this little spot offers great food and drinks options, at even better prices.

Apart from our ranking of the best free viewpoints in Barcelona, there are also many other points distributed throughout the city from where you can check out the Catalan capital totally free of charge. If you have time during your stay in Barcelona, we also recommend doing the “Carretera de les Aigües” excursion. This hiking trail, situated in Collserola park, is a fantastic route of approximately 8km, great for those who want to take in some of the very best views of the city (on this route there are ample opportunities to take in some stunning scenery of Barcelona) and disconnect from the hustle and bustle of the Catalan capital.