I´m sure that the Arc de Triomf of Barcelona monument has appeared on all the web pages you have seen when looking up “what to see in Barcelona” or “most important tourist spots in Barcelona”. The truth is, that doesn´t surprise us, since it is one of the most important symbols in the city that you can certainly shouldn’t miss.

Located at the beginning of the Lluis Companys promenade, and only 20 minutes’ walk from Plaza Cataluña, the Arc de Triomf of Barcelona is one of those monuments that you would like to know all about its history. Apart from that, it’s also great for taking some great photos and shouting from the roof tops: look at me, I’ve been to Barcelona and it’s beautiful!

In general, and as the name implies, an Arc de Triomf is a monument built to celebrate an important military victory that a country or region has achieved. In the case of the Arc de Triomf of Barcelona, it´s 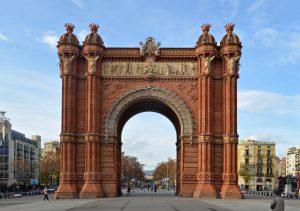 not actually like that, as it was actually built in 1888 as a gateway to the “San Juan Hall” of the famous “Universal Exhibition of Barcelona of 1888”. Its architect, Josep Vilaseca i Casanovas, wanted to give a new meaning to this type of construction, so the Arc de Triomf of Barcelona symbolizes exaltation for Catalan culture, the homeland, an open mind towards change and progress and, above all, supporting the idea that Catalonia was open to modernity and the new twentieth century.

Speaking of technicalities, this 30-metre-high arch was built of brick and stone in the neo-Mudejar style. The Arch’s decorations and friezes represent different things. First, we have the high relief of “Barcelona welcoming the nations” on the front face of the arch that overlooks the Passeig de Sant Joan. In the other, we can see the frieze that represents the delivery of prizes and rewards to the participants of the universal exhibition. On the sides are representations of the sciences and arts (right) and agriculture and industry (left). Finally, if we look at the circumference of the arch, we can see a series of 49 shields, which represent the different Spanish provinces. The shield of Barcelona is located right in the centre.

One of the most remarkable facts about this monument is that, at the gathering which decided what project would be built to commemorate the universal exhibition of 1888, one of the rejected projects was Gustave Eiffel’s infamous Eiffel Tower. Can you imagine what would have happened if the Eiffel Tower was built in Barcelona?

There are so many more curiosities and interesting facts hidden inside Barcelona’s Arc de Triomf… some say that this monument represents different spiritual beliefs due to the gargoyles and dragons that are located both in this sculpture and in the street lamps around. The only way to check for sure is to see it with your own eyes!