Coming to Barcelona in summer can sometimes be a little overwhelming. If not for the heat and sweltering Mediterranean sun, than for the wealth of events and opportunities happening in the city. Barcelona Connect have narrowed down the best activities and festivals this summer in Barcelona, so that you don’t miss out on the some of the best bits.

Let’s starts with some of the major festivals and parties during summer in Barcelona:

Barcelona is known to host some of the biggest and best music festivals in Europe, one of these is Sónar. If you like electronic music and dancing until sunrise, then this festival is for you. The 28th edition of the festival will be from the 18th-20th July and will include sensational acts like A$AP Rocky and Disclosure.

This traditional Catalan celebration takes place on the 23rd of June and welcomes the official start of summer with the summer solstice. It is considered one of the most magical and important nights of the year in the region. This night the city will come to life with bonfires at the beach, fireworks in the sky, and parties across the clubs and bars that will last way into the next morning.

From the 1st of the month and lasting the whole way through July, El Grec Festival returns to city to showcase the very best of the performing arts. Dance, theatre, music, and circus acts will perform in various venues across the city, namely the open air theatre on Montjuïc Hill or in the Teatre Grec. 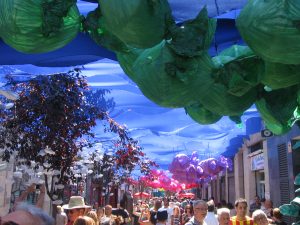 Every neighbourhood in Barcelona is known for its summer street party, but the party in Grácia might just be the best of all. This year, the week-long fiesta will take place from the 14th-20th of August and is expected to draw in thousands of visitors excited to see those competing for the title of ‘Best Decorated Street.’ Other festivities include traditional parades, human towers, fire runs, live music, street stalls, and so much more.

Summer in Barcelona 2019: Ideas and Activities

If festivals aren’t your thing, take a look at some of the other things happening below.

Barcelona is full of great rooftop bars and beach clubs, perfect for enjoying a drink anytime of the day (or night) and taking in some equally as incredible views of the city or the Mediterranean sea.

If you’re looking to go partying while in Barcelona, we recommend checking out the beach clubs next to Vila Olímpica, the catwalk home to some of the most famous names in the country like Opium, Shôko, and Pacha.

For those looking to escape the hustle and bustle of the city streets this summer, head to the region of Maresme, just 30 minutes away from Barcelona by train. Here there are plenty of beautiful beaches where you can sunbathe and relax all day. This area is also great for families as it’s not as crowded as Barcelona and it also has its own beach promenade, aquarium, and water park.

With both mountain, city, and beach, we’re not surprised that Barcelona is loved by so many people. The city is home to many incredible beaches, particularly Barceloneta beach and Nova Icària beach which are the most popular ones and closest to the shops and restaurants on the promenade. If you want to find a quieter spot, walk along the coast to Mar Bella Beach or Bogatell beach, just 10 minutes away, but just as beautiful.

Ready to book your apartment?

Have you thought about where to stay while your stance in Barcelona? If you want an advice, we would love to recommend you staying in an apartment close to the beach so you can enjoy the Mediterranean sea every day. Moreover, the beach is just 20 minutes away from the city centre so you could visit as well all the city and go wherever you want of Barcelona.