As the second most mountainous country in Europe, Spain has some excellent ski resorts. All you winter sports people, keep those fingers crossed for more snow, and whether it’s skiing, snowboarding, big-foot, or sledging, we bring you a brief introduction to some of the most easily accessible spots near Barcelona. Getting away has never been simpler! So, what exactly have these resorts got to offer for the shaky beginner and ready-to-go pro? 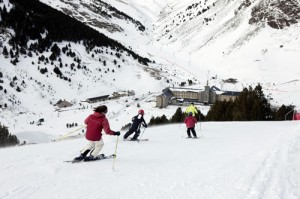 The valley of Vall de Nuria comes down from the crest of the Pyrenees in the province of Girona. This is a haven that you can escape to all year round, and in winter it is more than equipped for a great skiing holiday. It has a total of 11 alpine ski slopes: 3 green, 3 blue, 2 red and 2 black. Although there is no road access to the valley it’s easy to reach by train, so is perfect for a day trip. It has great facilities for beginners, pros, and families, including a ski school, equipment hire, snow parks, and medical services.The prices are more than reasonable: a group ski/snowboard lesson costs 22€ (max 6 pers) for 2 hours; whilst a 1 hour private class will set you back 35€. Non-skiers can enjoy the snow with activities like cross country skiing, sledging and snowshoe outings. Rental of skis, poles and boots costs 19,80€ for one day.

Get the train from Barcelona Sants to Ribes de Freser, then rack rail (cremallera) to the slopes of Vall de Nuria. You can also get there by bus. Ski pass plus rack rail ticket costs €29 and a weekend skipass plus rack railway is 49,30€ Further info: www.valldenuria.com 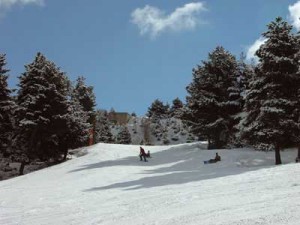 This popular ski destination near Barcelona is reputed to be the oldest resort in Spain, and is the closest to Barcelona. It is divided into 4 different ski areas, with a total of 53 pistes of different levels from green to black and 16 lifts. There is a self-timing kilometre speed run for those up to the challenge, and any boarder who has mastered the “staying upright” technique can show of their skills the tricks at the Snow Park, featuring a 100m superpipe. Much entertainment is also guaranteed for the onlookers. Other activities on offer include alpine skiing, husky sledging and circuit sledging.

You can get a RENFE package for €41. This includes train from Sants to La Molina, connecting bus to the La Molina slopes, one day ski pass, and insurance. The bus company Sagales also run a service every Weds for 34€. This includes the return bus day trip and insurance. Further info on coaches visit www.sagales.es . For further info about the resort see www.lamolina.com. 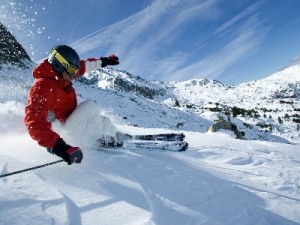 If you are thinking to go a little bit further away from the city, one place comes to mind: Andorra. This small country is located in the eastern Pyrenees, and borders with Spain and France. Known for its tax-haven status, the principality attracts over 10.2 million tourists each year. Grandvalira is the biggest and most legendary resort in Andorra, with spectacular landscapes and panoramic views. It is slightly further away, but with 110 pistes of all levels over 193km and plenty good boarding runs, it would be well worth making a weekend of it.

Grandvalira is an amalgamation of 6 resorts, including the Pas de la Casa, Gran Roig and Soldeu El Tarter resorts, and a skipass for the whole area is available. The larger scale of the resort means that even with only about 50% of the pistes open, this is still a reasonable 41 slopes totalling about 60km. It was only in 1985 that artificial snow machines where installed as it is a reliable resort that is rarely left ‘snowless’.
How to get there/ how much: It is not difficult to reach, all 6 points of access to the resort are along the Carretera General 2 , aka the “road to France”, along the Valira d’Orient river valley. Alternatively you can reach Andorra town with coach companies such as: www.andorrabybus.com or www.autocarsnadal.com. There are daily bus connections to Grandvalira. A one day skipass for the whole ski area is €45 and a half-day pass after 13:00 is 35€. A beginners pass for those only using the beginners areas is just €26, and a “Freestyle” pass for those using only the freestyle slopes is 35€. Insurance costs 4,10€. Further info: www.grandvalira.com 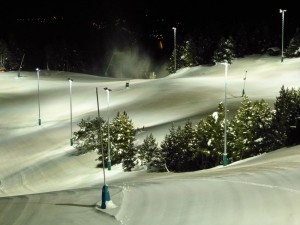 Ski by night at Masella

Ski by night at Masella

The ski resort of Masella, near La Molina has 64 pistes covering 74km of slopes. These include 9 green super-easy slopes, 9 black slopes for the brave and foolish, and the rest are inbetween. Masella also offers nocturnal skiing. The pistes are floodlit, and from 18:30-20:30 the day is extended for late-shift skiers, or those who are simply having too much fun to go home yet. An evening-only skipass costs 20€, or you can add an evening supplement of 12€ to your day pass which costs 41€. www.masella.com