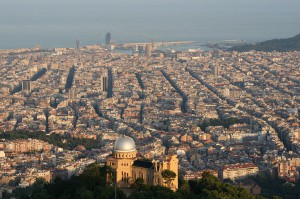 Barcelona from the top of Tibidabo Mountain.

This historic district has been populated for over a millennium. By the end of the 15th century a significant community had developed around the church and the farmhouses outside the village. This rural society was heavily dependent upon the land, however, it gradually attracted artisans and craftsmen. Sarrià started to become more prosperous and by the 20th century it was one of the wealthiest areas of Barcelona, with many extravagant residences and mansions.

Sant Gervasi has historically been a popular settlement due to its location on the slopes of Tibidabo  which provided a constant water source. Sant Gervasi was declared independent from Sarriá in 1714 but it was discovered by the bourgeois elite long before Sarriá in the 19th century. There are many stately homes there from this period reflecting its popularity.

In 1921 Sarrià and Sant Gervasi became two of the last neighbourhoods to be incorporated into the municipal area of Barcelona. 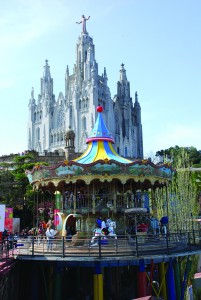 Tibidabo Amusment Park with a great view of the Sagrat Cor in the background.

Park. You’ll also find the Tibidabo Amusement Park, which has fun rides for all the family. This dates back over 100 years and is one of the oldest theme parks in Europe. Enjoy a quirky combination of  old fashioned charm, with the big wheel and rollercoaster, and new modern rides for the thrill seekers.

Torre Bellesgaurd is an architectural masterpiece designed by Antoni Gaudí. It has only been open to the public since September 2013, so many people won’t have seen it yet. Come on, Gaudí fans, what are you waiting for?! Built on the remains of the castle Martin the Humane, the last king of the Catalan dynasty, there is an unbelievable amount of history here along with Gaudí’s trademark amazing designs.

The Cosmo Caixa Science Museum has several permanent and temporary exhibitions that give visitors a greater insight into the world we live in. A star attraction is “The Submerged Forest” which recreates 1000m2 of an Amazon rain forest ecosystem, complete with piranhas and crocodiles. You can also visit the Planetarium and take a trip into the depths of our galaxy and beyond with its amazing 3D shows. It’s a perfect place to visit with kids, as there are dozens of interactive activities. 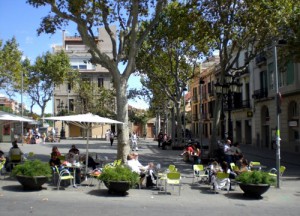 There are plenty of good restaurants in these neighborhoods. One of the main streets, Carrer Gran de Sarrià, has several favorites such as Restaurante Vivanda (Major de Sarria, 134), which has a splendid terrace. Another well rated restaurant is Tram Tram (Major de Sarrià, 121), specializing in seasonal Catalan cuisine. You’ll also find several popular nightclubs here, such as Sala Be Cool in Sant Gervasi (Plaça Joan Llongueras, 5), and  the classic Otto Zutz (Lincoln, 15), at the lower end of Sant Gervasi, next to the district of Gràcia.

Sarrià and Sant Gervasi are located above Avinguda Diagonal and are not very well connected by the metro; only the L3 metro passes the eastern side (Fontan and Diagonal). The best way reach here is using the FGC trains which can get you really close to the main sights such as Tibidabo. There are also trams traversing the Zona Alta; T1, T2 and T3 are all in this area heading towards Bon Vitage, San Marti de l’Erm and Consell Comercal respectively.