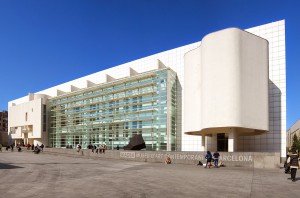 Raval has long been known as the roughest part of central Barcelona. Being outside of the city walls which used to divide Barcelona, Raval was the playground for prostitutes and drug dealers. The feeling of being on the dark side still exists in some parts of Raval and you do have to be aware of pickpockets in and around the backstreets, but many of the shady areas have now been cleaned up. In 2000 the Rambla del Raval replaced a whole slum block which is now filled with bars and an array of Middle Eastern takeaways and kebab shops. Raval is also known as a popular hangout for a chic crowd of bohemian types including writers and artists.

A wave of immigration has also significantly changed the Raval neighbourhood. The southern end is made up of immigrant communities from Pakistan, China, North Africa and the Philippines. There are many shops and restaurants catering to the new population giving the southern end of Raval a distinct character.

MACBA Contemporary Art Museum was opened in 1995, and hosts a unique and large collection of contemporary art. The museum’s mission is to offer a wide range of artistic vision for the purpose of creating conversation on art and culture. The building is just as impressive as the art inside, a true architectural masterpiece. 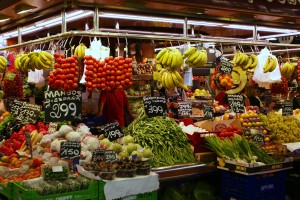 Boqueria Market on La Rambla backs onto the centre of Raval and is not to be missed. On entering you will be greeted by a feast for the senses. It is rich in colour and smells with every kind of produce you can imagine; fruit, vegetables, ham, meat, cheese, fish and seafood, sweets and nuts. You can enjoy the hustle and bustle by taking a seat at one of the tapas bars or restaurants around the edge of the market and tucking into some of the freshest produce you will find in Barcelona.

Palau Güell is one of the earliest works by Antoni Gaudí that can be found in the city. The palace that Gaudí designed for Eusebi Güell is full of beautiful and ornate details. It is also an architectural attraction that is sometimes over looked by tourists. Here you will find many design elements that are typical of the famous architect. Smaller  crowds make it a nice, leisurely way to spend part of your day.

Bar Marsella is possibly the oldest bar in the neighbourhood. It is said that Ernest Hemingway could often have been found here slumped over a glass of absinthe. This bar is popular with artists and young travellers because of its bohemian atmosphere, and also because it’s known for serving real absinthe. As the neighbourhood has changed over the last century, this bar has been a staple of the area.
Address: Carrer de Sant Pau, 65 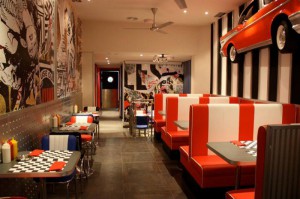 Big J’s Burger serves a variety of traditional American dishes, including hamburgers and chicken wings. This restaurant is in the heart of the Raval neighborhood, and a great place to stop for a late night milkshake.
Address: Carrer del Carme, 74

El Cangrejo literally meaning crab, is a gay club in El Raval. Don’t let the definition deter you from visiting this exciting club because is crowd comes from all different cultures and sexual orientations, sharing a mutual desire to dance. On the weekends the club hosts a dazzling drag show. El Cangrejo is a great alternative to the high priced clubs near Barceloneta. There’s no entrance fee and the drinks have lower prices .
Address: Calle Montserrat, 9

Raval is right in the centre of Barcelona, so  the best way to get there, other than walking, is by metro. L1, L2 and L3 all stop within Raval. Catalunya is in the north, Liceu in the centre, and Drassanes to the south.