The famous boulevard of Passeig de Gràcia in Barcelona stretches from Plaça Catalunya to Diagonal. You will find two of Gaudí’s most important works here, the Casa Batlló and Casa Milà, which is also known as La Pedrera. This wide avenue has many of the most prestigious fashion shops and brands in Barcelona, from Gucci to Hermès, and Bulgari to Burberry. Here are 5 details you might not already have discovered about Passeig de Gràcia. 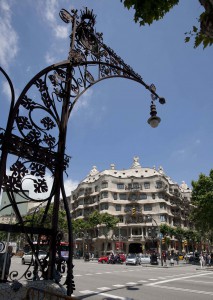 Glance up and appreciate the cast iron Modernist lamp posts which line Passeig de Gràcia. They date back to 1906 and were designed by Pere Falqués. Each of the 32 lamp posts are integrated with a bench built in the with the classic “trencadís” style of Catalan Modernism.

One of the most eclectic and fascinating museums in Barcelona, this was inaugurated in 1961 and presents the evolution of the perfume bottle. Prized scents have been stored in ornamental vessels by cultures as ancient and diverse as the Egyptian, Roman, Greek, Etruscan and Arabic civilisations. You can also see the explosion of variety from the commercialisation of the perfume industry in the last century.

The magnificent building of Palau Robert is located at the top of Passeig de Gràcia, on the corner of Diagonal, and is well worth discovering. It has a tourist office which is far less crowded than the one in Plaça Cataluyna. Enjoy free photography and cultural exhibitions inside, and relax in the elegant gardens as you plan your next move.

As you walk past Bulevard Rosa you might not realise that this is in fact a shopping arcade that has more than 100 shops inside. You’ll find boutiques and brand shops with fashion, shoes and accessories. It’s the ideal place to dive into when it’s raining! 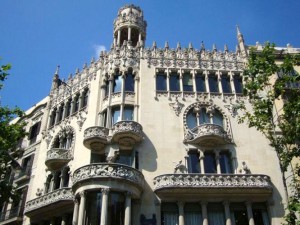 Casa Lleó y Morera is a remarkable Modernist building by the Catalan architect Lluís Domènech i Montaner which was recently reopened to the public. Top craftsmanship includes mosaics, ceramics, sculptures and glass. Discover its hidden secrets with a guided tour.