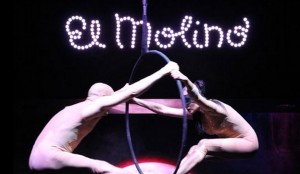 This is one of Barcelona’s most historic burlesque and cabaret venues, inaugurated in 1898. Heavily influenced by the Paris scene at the turn of the 20th century, its name changed  to Petit Moulin Rouge in 1910.  This became El Molino in 1939, and has entertained its audience under that name since. El Molino was renovated and relaunched in 2010, and remains one of the most popular and prestigious alternative venues in Barcelona.

Shows are produced by El Molino and include an all-star cast of singers, dancers and acrobats. Colourful costumes and a dazzling light show brings performances to life. Sit back, and see what happens when a this talented troupe hits the stage and the magic begins.