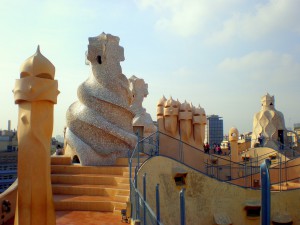 The rooftop design of Casa Mila, or La Padrera, a famous Gaudí building in Eixample.

Barcelona’s Eixample is one of the most ambitious and arguably most successful examples of modern urban planning. By the 1850s, the city of Barcelona was confined by the walls surrounding what we now call the “Gothic”, or the old town, and was getting dangerously and uncomfortably overcrowded. There simply wasn’t enough space for the growing population.

The decision was taken to bring down the walls and for the city to extend upwards and outwards, connecting it with nearby villages such as Gràcia and Sants. A successful design proposal for Barcelona’s expansion was put forward by the architect Ildefons Cerdá. Its ordered grid-like pattern reflects the era’s predominant desire for efficient and rational structure. It comprises of two distinct areas; Eixample Dreta to the right and Eixample Esquerra to the left. They are divided by Passeig de Gràcia and Rambla Catalunya, which in turn are intersected by Avinguda Diagonal and Carrer d’Aribau, all of which are prime real estate areas.

The project was lifted up to a new level by coinciding with a generation of very creative and active Modernist architects who seized this perfect opportunity to materialise their visions within the framework of this urban expansion. Each trying to outdo each other, the results can best be appreciated in the area known as the “Quadrat d’Or”, around Passeig de Gràcia between C/ Muntaner and C/ Roger de Flor. One of the most important buildings in this area is Gaudí’s magnificent Casa Milà, also known as La Pedrera. 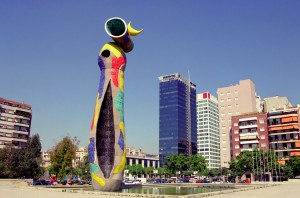 Manzana de la Discordia, or the  “block of discord,” can be found within the Quadrat d’Or section and is named for the clash of styles of its four main houses. There is the Casa Lleó Morera (1906) by Lluís Doménech i Muntaner, the Casa Bonet, which is now the Perfume Museum, the Casa Amatller (1900), by Josep Puig i Cadafalch, and of course the Casa Batlló (1906) by Antoni Gaudí.

Sagrada Familia is another Gaudí masterpiece in this neighbourhood. Designed to be a great cathedral for the city of Barcelona, this architectural work of at has been under construction since the early 1900’s. This sight is quite possibly one of the most iconic in the entire city; travellers from all corners of the world visit this massive structure and gasp in awe at the genius os its intricate design work.

Parc de Joan Miró is right on the edge of the Eixample neighbourhood and was built on the ground of an old slaughter house. The most enticing feature of the park is the abstract sculpture, Dona i Ocell (Woman and Bird), designed by Joan Miró.

La Gondola is a wonderful and casual Italian restaurant in the Eixample Esquerra serving wood fired pizza, traditional pasta, meat and fish dishes. On Saturdays the restaurant offers a fun pizza workshop for kids so parents can enjoy some quiet time. 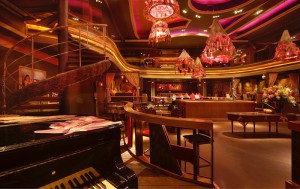 Bar Best Sellers is a cocktail bar that has a dance floor you will never want to leave. The music ranges from pop-rock to mainstream dance. Right in the heart of Eixample, it’s just a few minutes’ walk from the Provença FGC station and Diagonal metro.

Club Astoria has become a hotspot for the classy club goers in Barcelona. The romantic decor, and heart shaped seating in the VIP area make it a great place to go with your significant other. It is also a great place for a group of friends to go release some energy through dancing.

There are many transport links traversing the district of Eixample. If using the metro L2, L3 and L4 all pass through Passeig de Gràcia whilst L2 and L5 pass through Sagrada Família. Alternatively, the FGC train goes from Plaça Catalunya to Provença in the heart of the Eixample. If you would rather stay above ground there are also many bus routes with access to the rest of the city.