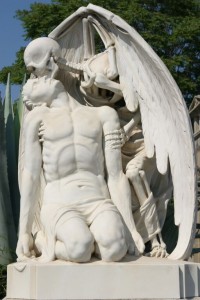 “Kiss of Death” in Poblenou

Cemetery tourism is becoming more and more popular in Europe, especially since there are different types of cultural events taking place on their grounds. Barcelona is proud to be able to share the valuable funerary patrimony that can be found in its two monumental cemeteries, Poblenou Cemetery and Montjuïc Cemetery, both of which are internationally recognized by the ASCE (Association of Significant Cemeteries of Europe).

Poblenou Cemetery was the first municipal cemetery in the city, a reference for the entire country and a work of neoclassical art and Egyptian elements from the beginning of the 19th century. Montjuïc Cemetery represents the later expansion of the city and the economic growth of Barcelona. This economic boom brought modernity, industry, and commerce to the city, which was shown by the large pantheons and sculptured tombs designed by the best artists and architects of the age. 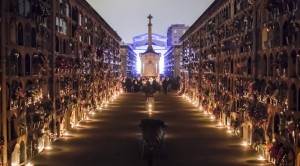 CBSA has developed different cultural routes in their cemeteries which show the architectural richness and artistry of the sepultures of the illustrious figures buried there. The routes also help us to build a narrative which reflects the evolution of the last two centuries in the history of Barcelona.

To give the visitor the best experience possible, there’s a free app with a map of the Poblenou Cemetery, and an audio tour, available in three languages. Montjuïc Cemetery has four different cultural routes, one for every type of interest: an artistic route, an historical route, a route that is a combination of the two, and a fourth route that takes the visitor to the Fossar de la Pedrera, which has a memorial to the victims of the Spanish Civil War, the repression of Franco’s regime and the victims of the Holocaust.

A highlight of Montjuïc Cemetery is that it houses the Funeral Carriage Collection, the only one of its kind in Europe. The Collection is made up of 23 original pieces which were used in funerals in the city of Barcelona for more than 100 years. A visit to the Collection offers the opportunity to observe works of great artistic value from a not-too-distant past, when death was accepted in a different way and funeral carriages were a main part of the funeral ceremony organized in the streets of Barcelona. 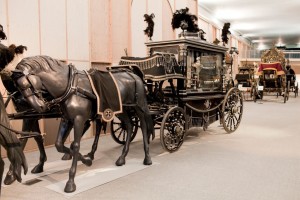 Both Poblenou and Montjuïc cemeteries organize Night Tours twice a year. These tours allow visitors to see the wealth of the artistry of the cemeteries in a special way. This is one of the most successful activities that CBSA organize. The tour guides dress in period costume and actors play the part of people important to the history of Barcelona. Musicians perform in different points along the tour and the path is illuminated by candlelight. These tours take the visitors past the most beautiful and interesting parts of the cemeteries.