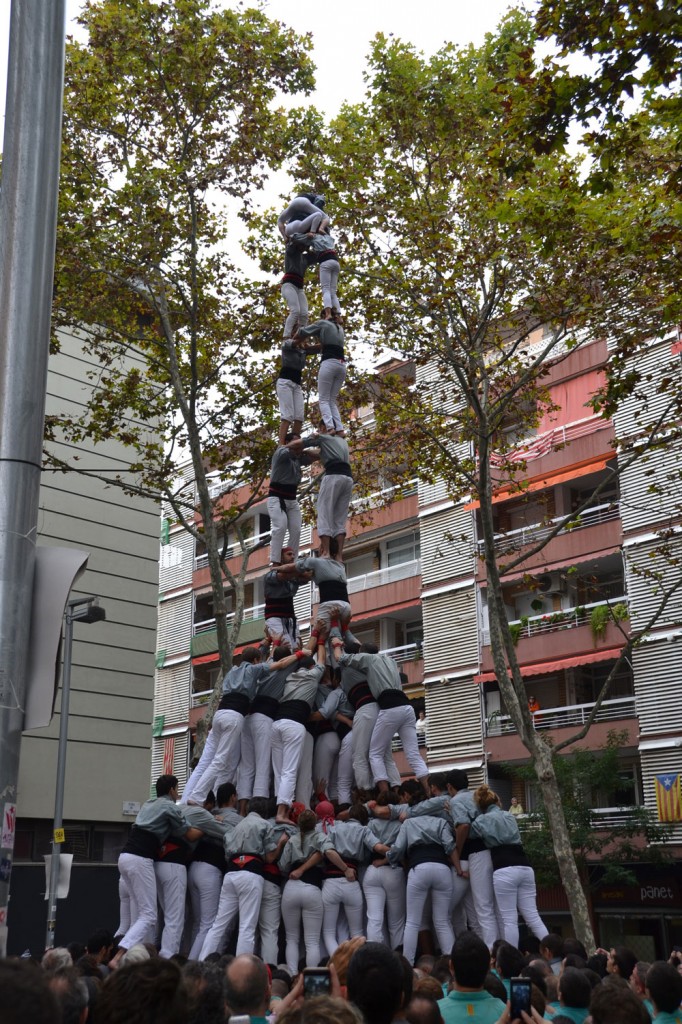 Els castellers, the human castles. Each is a tower of teamwork, a tower of everyone- the old, young, ladies and little ones. Material tied round their waists to hold onto, they climb up bare foot. Built before your eyes in minutes, the little ones then clamber up bravely, wearing helmets almost bigger than themselves and appearing more like blobs with little legs poking out. They join together and the tiniest of all reaches the top. One hand is holding on for support and the other sticks up in the air – just for a second or two – and the pinnacle is reached. Then that tiny one with tremendous guts is the first to come down, wrapping arms and legs round the bodies below and sliding down like a monkey. The descent begins and requires just as much skill and patience as going up. Now and then there is a shake and a tremble. On occasion there is a break and they fray apart. They fall down like ants – only then do you realize they are human.

Inside the castle walls

I arrive at the school to meet Seamus at a quarter to ten on Friday night and find a stack of people already in mid-air. They are focusing on the top section of a castle and the littlest is practicing her scramble up to the top and nimble hurdle over her frog-like friend positioned underneath, who has all her limbs resting on two buddies below. There is netting for protection. There are at least two hundred people gathered in the school and noise levels are pretty high as everyone is chattering away. I see people winding themselves tightly into the long fabric stretched out by a fellow casteller. This snug belt, Seamus tells me, helps hold everything in and gives support to your back. Seamus is a baseman, one in the sea of people at the bottom of a human castle, and only comes to training once a week, whereas those higher up have to train two or three times a week. Somebody is shouting instructions and Seamus has to get to work. I quickly lose sight of him amidst the action. 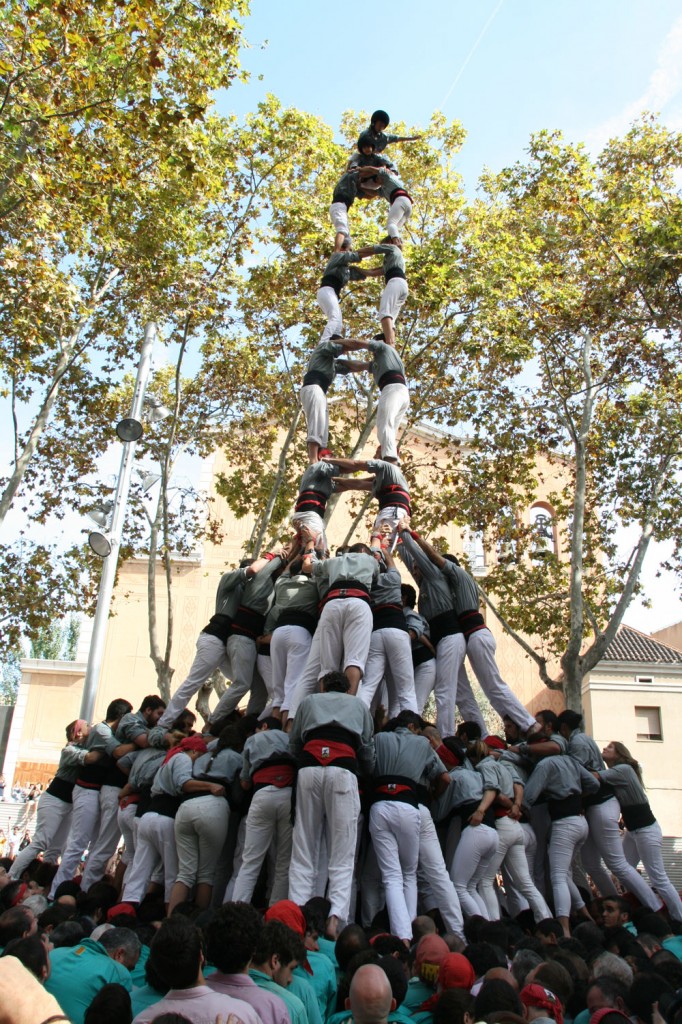 Noise goes down and castles go up

Noise levels go down and I watch the castle being built from start to finish. Having only ever seen the castles in squares choc-a-block with crowds, I’ve never been able to appreciate what goes on at the base, which can sometimes have up to 600 people in it. I feel myself flinch as I watch a strong, fully grown man climb up on the shoulders of people below and wade towards the centre to form the second layer. There is a grimace from one of the base members from the weight but it soon lifts and he is alright again. I am aware I’m holding my breath as I watch the girls ascend from the gym floor to their positions up high, hold, and slide down again. I see the struggle in a man’s face higher up, but he hangs in there. The castle is never completely still, with so many bodies and so much life in its walls it would be impossible. It sways gently, stretches outwards at times as the weave of people loosens from the pressure, from gravity. However, it does not break. A pretty girl slides down from up high and just before her feet touch the ground she plants a kiss on the last head she meets, which I take to be her father’s.

I am introduced to Joaquim, who has been in the Sants team for 22 years. He catches his wife who is walking around purposefully and introduces me to her. His three children all take part too. In front of us two little girls are stuffing their feet into a pair of somebody else’s very large pair of Crocs and giggling away. He tells me that he’s known one of them since she was in her pram and the other since she was just a bump in her mum’s tummy. Together we watch the next castle go up. I have lost sight of Seamus again. This time I notice lots of woman and girls on the outside of the base leaning in flatly like fish against those in front. They nestle in so neatly that I start to believe Joaquim when he says there are seventy people in that second base. I see these ladies now as buttresses supporting the structure, supporting the men on the bottom who bear all that weight of the second base with seventy people jammed in, and everyone above. Joaquim tells me he estimates the second base to weigh around five tonnes.

I see a teenage boy near the top wearing a mask that makes him look a bit like a Mexican wrestler. On his return I ask Seamus about it and he explains that he had a fall recently and broke his nose so it’s for protection. No time to dwell, I am introduced to Seamus’s charming son Cormac (22), who despite living most of his life here in Barcelona retains a gorgeously Irish accent. He used to be one of the wee ones at the top, until he grew and was kicked out of that spot and placed further down. I then meet Paula (21), the pretty girl and planter of that beautiful kiss. Like Joaquim, this is very much a family thing for Paula. Both her parents and brother participate and she also used to be a little person at the very top. It’s the only thing our family do all together and at home all you hear is “castellers this and castellers that”. She tells me that her mother is a ‘crutch’ and demonstrates the position by wedging her shoulder under Cormac’s arm and pressing against him. Once again I contemplate the compactness of the base in the castles; like Seamus, I’ll probably never be able to spot her. For Paula, the hardest part is doing a stack of singles (a tower of one person on top of another), where the work is all on you. Her best memory is when they managed to complete a gamma extra, which consists of nine layers of people, for the first time last year at the diada (National Day of Catalonia). She said she’d always wanted to perform it and had worked very hard. I ask about friends in the group as I see a young couple cuddling from the corner of my eye. She says she has a few very good friends within the group and has made friends with other castellers over the years of meeting other teams at events.

Before long they all go off again and it seems that nearly everyone is involved in this castle. There is a definite sense of concentration in the air. This castle seems much bigger than the others. The very top people aren’t involved in this and I see them sitting in a circle playing behind me while all of this is happening. I find out afterwards that they don’t send them up high every time for safety reasons. With a castle that big and with nearly everyone involved the floor is bare, who would break their fall? They don’t want to risk it and so wait until the events. Sara (9) is putting on her shoes on the floor in front of me and I ask her how long she’s been making human castles and how she enjoys it. She says she’s done it for a year and a half and loves it. Unlike the others I’ve met, nobody else in her family does it – she got involved because her friend does it. When I say that her parents must be very proud of her she grins and nods enthusiastically. She then runs back to her friends to play.

Joaquim returns and we resume our chat. He thinks that training is more demanding than it was before. This is because the castles are getting higher and higher and involve much more practice. Seamus and his son tell me about the rival team, Barcelona, who wear red shirts and whose group was founded in 1969. The Sants team wear greenish grey shirts, and were founded in 1992. Official competitions are held every two years but I gather that friendly events also have an air of competitiveness. There is always the curiosity in who can do better and who can go higher. I ask Cormac what the hardest thing is.  “The falls”, he replies, “and not being able to perform a castle you’ve spent lots of time practicing because you know it’s not going to work. “The frustration in working towards something and it not working out,” he sums up. He unravels himself from his thick black belt round his waist and dashes off for a dinner. They really are human after all.

As we leave the gym hall after midnight, I am curious to know how it all works. Can anybody join? I ask, wondering how much of a rarity little Sara is in all this. “Ach, yes” he reassures me, “it doesn’t matter what’s your build, they’ll find a place for you.”

The last big event of the year

Don’t miss the Diada del Minyons Terrassa this Sunday (22nd November). The Sants castellers will be performing at midday along with the Barcelona group and the Terrassa group, els Minyons de Terrassa. Music and festivities will follow.

For information please see the links below:
www.terrassa.cat/es/recinte-firal