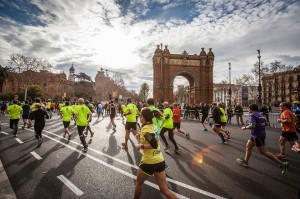 attracting both professionals and amateurs from around the world. 2016 was another successful year as the participation number reached over 16500, despite the race date falling on Valentine’s Day (14th February). The proportion of women competitors and international applicants also rose, and this year I decided to take part as a last minute applicant. The half marathon is a distance I have wanted to do for the last few years and I thought I would seize the opportunity while living in Barcelona! Like many others, La eDreams Mitja Marató de Barcelona, appealed to me because the route is relatively flat and straightforward compared to other half marathons, making it easier to complete for anyone who hasn’t had much experience in long distance running. 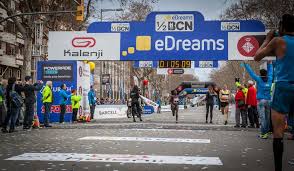 However for the same reason, the Barcelona Half Marathon also entices many professionals as the course has helped Florence Kiplagat break world records in 2014 and 2015. The course is also well suited as preparation for athletes competing in larger competitions. This year the race was ran by entrants who will later be competing in the 2016 Olympics in Rio de Janeiro, the Cardiff World Championships Half Marathon 2016 in March, and more locally the Zurich Marathon held in Barcelona, which is also next month. 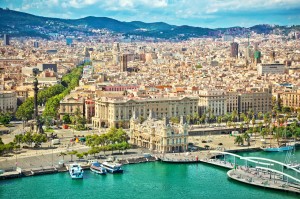 the heart of the city. As the 16500 participants followed the (just over) 21.0975km course they are able to run alongside many of the famous attractions in Barcelona, seeing even more landmarks from a distance. In my opinion, this made the race a lot more fun and interesting as it helped me get my race bearings and gave me an extra idea of what section of the course I was on in addition to the signposted distance every kilometre. Although, I have lived in the city for nearly 6 months I think including some of Barcelona’s best sights en route is useful for both locals and tourists, who have come over especially to compete. It makes it a lot easier to see your progress, boosting your confidence and understanding of where you are in respect to the full course.

The course was slightly revised from 2015 to give athletes more space and comfort while remaining similar to older courses, which had proved to be so successful. The start and finish point were between two well-known attractions, 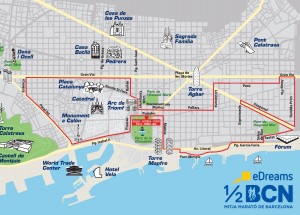 The Arc de Triomf and Parc Cituadella. The course began with roads parallel to Port Vell and then down Avinguda del Paral-lel itself, before reaching Gran Via, just missing out Placa Espanya. These are all huge sights in Barcelona and the 5km mark was just prior to Placa Universitat. Participants then continued towards the starting point, crossing Passeig de Gracia and then passing the Arc de Triomf before entering some lesser-known neighbourhoods: Sant Marti and Poblenou, where they would surpass the halfway point. Competitors then ran up and down the bottom of Avenue Diagonal, where the 15km mark lay, and passed Diagonal Mar shopping centre. Finally, the race covered a short stretch along the beach and back to the starting, now finishing line once more.

Despite enduring such a long race the route was scenic and with the sun shining brightly it looked even better, although everyone was feeling hotter! There was regular live music along the way from singers to bands to drummers with the general public also cheering at the sidelines. All creating a good atmosphere and helping to support the runners, especially when the temperature started to rise and people were slowing towards the end. I have never experienced the same feeling of elation as when I crossed the finish line on Sunday and I could not be more pleased that I signed-up and participated in the Barcelona Half Marathon 2016. This is a race and a distance I would strongly recommend to anyone.