Trending
javhide.comhttps://javplays.com
You are at:Home»Things to do»Barcelona by Bike: A Guide
By Barcelona Connect on 9 March, 2018 Things to do 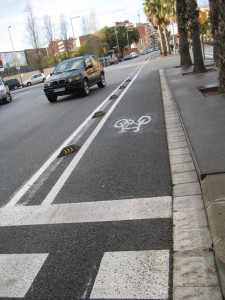 Barcelona has a great network of bike lanes throughout the city

Barcelona prides itself on promoting ecological awareness and that includes a healthy support of sustainable transport. It is one of the most bike-friendly cities in the Mediterranean, with numerous bike lanes that snake through the city centre. Larger streets such as Diagonal and Passeig Sant Joan have excellent bike lanes with which you can easily get around town. One of the most elegant and fascinating streets in the Eixample, Carrer Enric Granados, also has a bike lane, and is worth taking if it’s on your route. Make sure you stop to admire its many notable Modernist buildings.

If the prospect of finding your way to all the sights on your own seems too daunting, nearly all the bike rental companies also offer guided tours which range from themed routes such as Gaudí and Modernism to local tours that take in the top sights in the neighbourhoods such as Ciutad Vella, or Barceloneta, Port Olympic and the seafront.   As well as being led through all the short cuts you can be sure to pick up some interesting insider tips and nuggets of local information that might not be in your guide book. However you do it, exploring the city by bike is always a lot of fun. Bikemonk offer some interesting suggestions on what to look out for on bike tours. 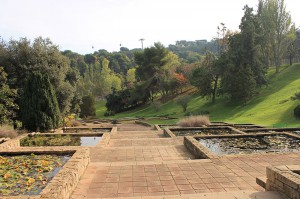 Explore the green spaces of Montjuïc by bike

One of the best places to go for a breath of fresh air is the Montjuïc mountain and its many parks. There’s a pleasant route that starts from the fountains of Pl. Espanya up towards Montjuïc Castle where you can enjoy spectacular views across the city and to the port and coastline below. Other roads pass by the villas, galleries and museums scattered along its winding roads.
If you prefer to avoid an uphill ride, the seafront promenade is a good option. Once you reach the Fòrum area you can continue out of town along the Maresme coastline as far as your legs allow. Here you’ll find the far less crowded beaches of Ocata, El Masnou and Premia de Mar.

The Collserola Natural Park is riddled with well-marked mountain bike trails that stretch for kilometres into this large expanse of natural reserve just behind Barcelona. Take the FGC train to Tibidabo or Peu del Funicular and take your pick. One of the most popular routes, the Carretera de les Aigües is a very pleasant and mostly flat route that stretches for 10km from above the Penitents district to the Pedralbes district. 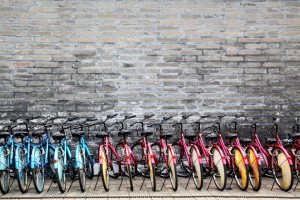 There are many bike rental shops in Barcelona

Rent a bike in Barcelona

Get your own set of wheels and make the most of your trip to Barcelona! Bike rental shops are especially plentiful in the city centre and in Barceloneta. You can rent a bicycle for a couple of hours, a whole day, or a couple of days. If you’re feeling more adventurous, you can cycle for as long as your legs allow along the coast to the nearby towns of Badalona, El Masnou, and beyond.

Barcelona is a fairly bike-friendly city, and the recent emphasis on green urban planning has led to a ever-increasing infrastructure of bike lanes throughout the city. You are advised to wear a helmet, and of course to never leave the bike unattended.