Poble Sec sits comfortably in the shadow of Montjuïc on the southern edge of Barcelona. Well connected by three different metro lines, green, red and purple, it certainly isn’t hard to reach. Nestled under the hillside the narrow sloping streets and tree lined footpaths makes this neighbourhood very aesthetically unique. But the real beauty of Poble Sec is its authenticity. You won’t find any shops selling fridge magnets here anytime soon. It has remained unscathed by the influences of tourism and still has a very distinctly local feel. Being non-touristic hasn’t however gone unmissed, and it’s now becoming a thriving up and coming community in its own right. 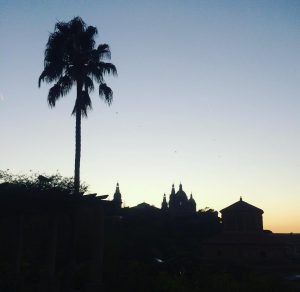 If eating, drinking and shopping, isn’t your thing, which is highly unlikely, Poble Sec still has an abundance of things to see. The real gems are well hidden though.  Walk down Avinguda del Parallel and you would think I was lying. It’s just another road. Wrong. The first must see stop are the gardens that hug the bass of Montjuïc. Here where the city limits end and the terrain steepens you will find the spectacular Jardins del Teatre Grec & Jardines de Joan Maragall. These secret gardens, as they should be known, offer water features, dazzling flowers, palms and an imposing view of the Palau Nacional, home to the Museo Nacional d’Art de Catalunya. Continue walking for 15 minutes and before you know it you’ve reached the summit of Montjuïc. The winding path that takes you there in itself is impressive enough though.  Each corner provides its own distinctive vantage point of the city below. As if the vistas weren’t enough, there on the top of this apex you will find the Castell de Montjuïc. From here you can see the whole of Barcelona below. 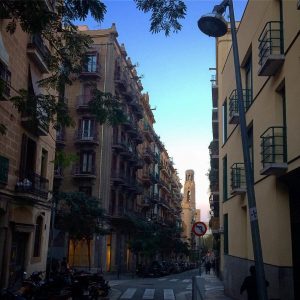 Within the urban confines of Poble Sec are some of Barcelona’s best kept architectural secrets. The steep street known as Carrer de Tapioles in the heart of this barrio takes the crown for the road with best buildings. Casa Battló and Casa Mila are really given a run for their money against their forgotten sisters, the unnamed 36 Carrer de Tapioles being one of them. The award winner though has to be the church of Parròquia de Santa Madrona whose steeple dominates the backdrop and is one of the prettiest chapels to be found in Barcelona.

Places to eat in Poble Sec

Every city and every neighbourhood has its road for food. Eixample has Rambla de Catalunya, El Born has Passeig del Born and Poble Sec has Carrer de Blai. This road is a mecca for pincho lovers and has become a trendy new hangout popular with locals. Most of these restaurants and tapas stops offer scrumptious nibbles from as a little as a euro. However, a favourite has to be La Tasqueta De Blai with its quirky new décor and famously good sangria, it’s a must! If fine dining is more your thing then look no further than Rioba restaurant. Those of you with a more sophisticated palate will certainly not be disappointed. Tucked away on a quiet residential street you will find this culinary oasis. For something altogether different meanwhile, try the tastes of South America at Electropikal. A distinctly Latino vibe is well established from its original décor and south American music but it’s their expert empanadas and quesadillas that make this bar so scrumptious. 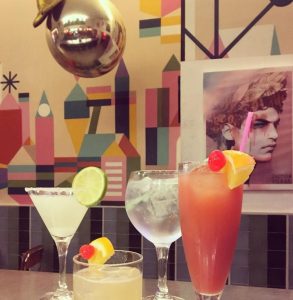 La Federica. This ultra-modern hangout well and truly puts Poble Sec on the map. Its chic design offers a throw-back to 70’s San Fran and is a world away from your average drinking hole in Barcelona. Its distinctly retro interior and edgy artwork is enough to warrant a stop off here, but more than anything, the cocktails are the talking point of this new bar! Quite possibly the best mojitos in the city and some of the friendliest staff you could find too. This fashionable new hang out also doubles as a gay bar and is helping open up new pastures for the LGBT community. Bar Seco is as local as it gets. Another cool vibey hang out offering mouth-watering cocktails and a great place to take in the ambience of this diverse neighbourhood. It’s here where you’ll be blown away by the creativity and presentation of its wacky cocktails. Original recipes, homemade jams and dried fruit make their drinks all the more divine. They place a strong emphasis on the importance of organic and local produce with some of the snacks and food they offer being home-grown. How Poble Sec. 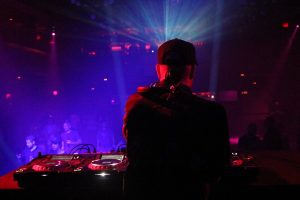 Sala Apolo is at the epi-centre of all things fiesta in Poble Sec. It has showcased some huge names from the electronic scene including the likes of Todd Terry, Carl Craig, Kenny Larkin, SBTRKT, DJ Shadow, Autechre, DJ Rush, Apparat and A-Trak. Recently, its Nitsa club opening has created quite a storm and built an ever growing reputation as one of the coolest events in the city. It is fast becoming a recognisable name on a European level and a big player in the techno music scene too. Held in the grounds of an old theatre it’s layout and ambience is very unique and most definitely worth exploring.