Trending
javhide.comhttps://javplays.com
You are at:Home»Barcelona neighbourhoods»Barceloneta»Tintin Exhibition: “The adventures of that young Belgian reporter in Tibet”
By Francesca Hector on 8 July, 2016 Barceloneta, Museums & Art

On 3 June 1950, a French expedition led by Maurice Herzog reached Annapurna, the first summit of over 8,000 metres conquered by man. The epic ascent inspired Hergé to create “Tintin in Tibet”, one of the most celebrated works of his collection, translated into Catalan in 1965 by Joaquim Ventalló. The exhibition, entitled “The adventures of that young Belgian reporter in Tibet” recounts both stories, the real and imagined, and pays tribute issuing Herzog’s expedition as well as successive Catalan expeditions to Annapurna in the years 1974, 1984 and 1987. 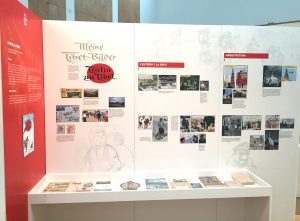 “Tintin in Tibet” is Hergé’s most personal piece. At the time of writing, the author was suffering a strong spiritual crisis and this work was a true introspective therapy. Hergé shows the human and transcendent side of Tintin, at the same time sharing his fascination with Tibetan culture. Since its first publication in 1958, it is estimated to have sold over 250 million copies around the world, in more than a hundred languages. The publication of the book coincided with the Dalai Lama’s flight to India to escape Chinese repression. More than half a century later, this still remains a current issue.

The exhibition shows a series of ritual objects characteristic of Tibetan culture, such as the Dra-Che, a red and saffron robe worn by monks from the Dalai Lama to the latest novice, or Sagdenyo, a long ceremonial trumpet, as well as objects and photographs from major expeditions to Annapurna. In addition to the objects, pictures and newspaper clippings that inspired Hergé, Tintin adventure lovers will also appreciate a foam and cardboard model of the plane that crashed in the snow and gave rise to the story, as well as a “natural scale” yeti. 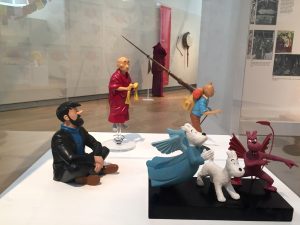 “The adventures of that young Belgian reporter in Tibet” can be visited for free from the 15th June to the 2nd October in the lobby of the Catalonia History Museum. Special activities are also being organised. From the 15th to 23rd June, in the same lobby, four monks from Tibet will create a special mandala for the occasion. Mandalas are ritual symbols belonging to Buddhist tradition based on symmetry, and representing equilibrium and the universe. Once the exhibition closes, the sand mandalas – which will be exhibited in a glass case – will be thrown into the sea with a special ceremony.

As a tribute to the pioneering mountain expeditions in the Himalayas, a climbing wall will be installed in the lobby, similar to the ones used by climbers to train. Two monitors will assist anyone over the age of six who wants to try and emulate the great climbers and reach the summit. This activity will take place on Saturday 2nd July and Saturday 17th September from 11am to 7pm, and it’s free.
Catalonia History Museum
Palau de Mar, Plaça de Pau Vila, 3
Open: Tues-Sat 10am-7pm, Weds 10am-8pm, Sun and public holidays from 10am to 2.30pm.